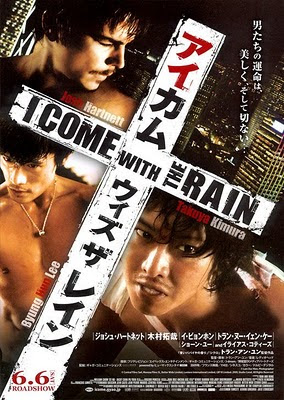 Without the information on the poster that this extraordinarily dreadful movie was the work of Paris-based Vietnamese director Anh Hung Tran, one could imagine that it was a collaboration between Mel Gibson and Park Chan-wook...after they'd both been beaten about the head with a hammer until they'd lost the ability to tell any kind of story in a coherent manner.

What we appear to have here is a noxious guisado containing many of the key tropes of global cinematic cool, interspersed with pointless scenes of men in showers or sitting on the edge of beds.

Representing America there's Josh Hartnett's Kline, a former LAPD detective 'contaminated' by his last job, hunting down the serial murderer Hasford, played by Elias Koteas. We get flashbacks to this relationship at various, not especially relevant moments during Kline's new project, an all-expenses paid private investigation into the whereabouts of Shitao, the misplaced son of a Pharma magnate.

Kline heads first to the jungles of the Philippines, where he's told that Shitao was murdered by the goons of a local mining thug who didn't want to contribute to an orphanage. The vaguest of trails takes Kline onto Hong Kong where Shitao does indeed appear to have turned up, performing Christ-like miracles in the long grass outside the city limits.

The police procedural elements of the plot proceed to break down as Shitao inadvertently messes with the missus of evil gangster Su Dongpo played by Korean star Lee Byun-hung. Scenes which appear to be going nowhere are interspersed with others featuring some very icky violence, and all this does somehow lead us to a final crucifiction scene...which may not actually be final after all, but by that time I'd seriously lost interest.