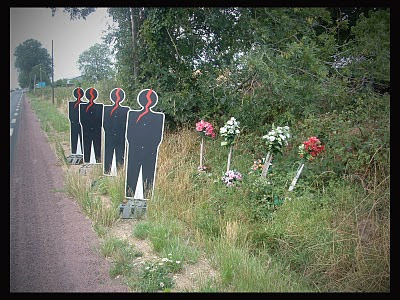 Drivers familiar with the roads in the south west of France will have come across these grim sentinels. On many of these highways are an almost ever-present reminder of the location and severity of fatal accidents.
One wonders how crowded the roadsides around the capital here (say in Villa Canales) would be if Ex-Prez decided to erect a cardboard stiff to mark the passing of every bus driver taken out by the maras.
On last night's evening edition of Noti7 it was a full ten minutes before we got to a story that wasn't about armed attacks on Guatemala's buses. The last and perhaps the most appalling didn't even involve extortionists; instead it was what appeared to be a road rage incident on the Reforma in the capital's smartest district, Zona 9. After a brief altercation arising from razones viales, a man on a motorbike (I'm actually assuming it was a bloke) took out a pistol and fired into a yellow school bus packed with young students, wounding the driver twice in the abdomen.

Posted by Inner Diablog at 4:07 pm