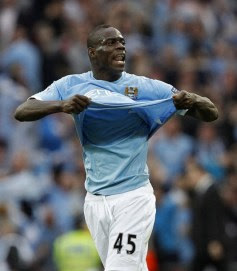 It's Cup Final Saturday and more than three times the population of Antigua Guatemala is right now seated inside Wembley stadium. Stoke are playing tight in the first half, obliging several Manchester City players to try their luck from long range.

One of these is the notoriously petulant Italian Mario Balotelli, he of the inflated ego and white Maserati. In September last year he was at the wheel of his other car, an Audi R8, when he was involved in a minor accident. Police at the scene were somewhat intrigued by the discovery that the footballer was carrying 6000 Euros on his person. Balotelli's explanation? "Because I'm rich."

Perhaps Super Mario keeps a big wad of cash in his pocket to satisfy a need to perform random acts of generosity. For it was only recently that he handed a homeless man one thousand pounds outside a casino.

Last week Balotelli's social work was in the news again. When asked for an autograph by a young fan outside City's training ground, he in turn asked the lad why he wasn't in school. Upon learning that a bully was making formal education a living nightmare for the autograph-hunter, Balotelli drove him and his mother to the school, where he set up a face to face confrontation with the headteacher and the alleged bully. Handshakes of conciliation were effected and Balotelli climbed back into his Maserati and drove off.

Born to Ghanaian immigrants Balotelli was given up to foster care as a young boy. Now his parents want him back. Balotelli's explanation? "Because I'm rich."
Posted by Inner Diablog at 2:30 pm