Post-2008 populist insurgencies have been piggy-backing onto a pre-existing bent in European politics: separatist, anti-establishment sentiment along with the compulsion to push back against globalisation by re-isolating.

In recent times the referendum in Scotland and then in the wider UK when the Conservatives offered a plebiscite over EU membership, the turbo-charging effect of populism has been clear - especially as this form of decision making appears both more popular and more democratic than it actually is.

But England and Scotland were both fully-formed nation states at the start of the modern era. Spain was always going to present a thornier set of problems to an established order confronted by devolving and decentralising tendencies.

This nation has always been more of an amalgamation: of kingdoms, of cultures, of peoples, of languages and dialects, of antiquated legitimacies. Even the modern monarchy sits on a mesh of mutually-reinforcing regional tiles, each with its own form of sovereignty.

The Inquisition and, more recently, the Franco dictatorship provide testimony to just how hard 'conservatives' have had to work to contain Spain's inner contradictions.

Mariano Rajoy was only (barely) able to form a government in Madrid after a second popular consultation. In the form of Podemos the populists are undermining the old status quo from within as well.

I guess I've found Rajoy unpalatable as a politician ever since his abortive attempt to pin the blame for the 2004 atrocities on the Basques - which cost him the premiership and condemned him to looking surly for seven years. In his own mind he is probably a Lincoln-like figure, standing up for the union and the rule of constitutional law, perhaps comforting himself that Abe used a lot more than boots, batons and pepper spray on the secessionist scumbags. If he wins, he might be reckoning, history will give him the same sort of uncomplicated thumbs up, while the would-be breakaways will be remembered as traitors.

For now other EU leaders will support his take on the letter of the Spanish constitution — that sovereignty belong to all — because it rather obviously suits them. But with any further escalation, who knows?

It strikes me that the genre of science fiction reveals that many liberal westerners tend to imagine our collective political future as one of ever larger structures, one of federations, if not empires. For deep down we surely recognise that nationalism is a rather base instinct, and thus anticipate that it will eventually be dissipated by the sort of diversity we witness on the bridge of the starship Enterprise — with only the Klingons literally clinging on to the urges embodied by the likes of Nigel Farage.

Yet let us not forget that Catalunya was the wellspring of the anarchist disposition on the Iberian peninsula prior to the Civil War, and thus one should remember that the alternative utopian path to one big happy human family has always been one of radical de-centralisation. 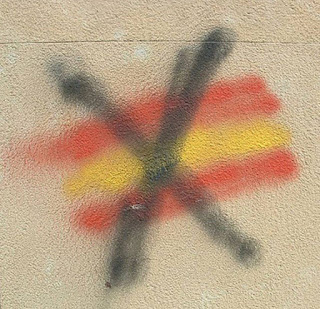