Peak Jesse Eisenberg, I thought. Quirky, indie comedy for the Sundance set, I further concluded, not having read up on any reviews.

In auto-pilot mode for the first twenty minutes or so, we'd not even fully clocked that it was a period piece seemingly set in the early 90s. 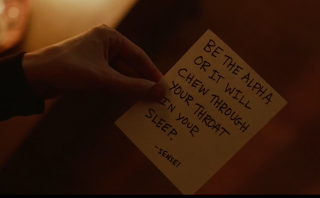 And then we started to sit up straight, caught almost completely unawares, as Riley Stearns takes this tale of a timid accountant drawn into to the increasingly sinister microcosm of his local karate dojo in carefully calibrated stages from yellow right through to darkest black.

Like the students of disarmingly malignant 'Sensei', his movie punches hard with its feet.