As Chris Rock quipped at the Academy Awards last Sunday, this sounds like a no contest. 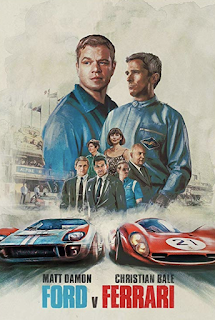 In the UK, where you can't easily include a brand name in the title of a film unless you own it (i.e. The Lego Movie) it has been doing the rounds as Le Mans '66.

It's less the David and Goliath contest suggested by the original title than a drama driven by a cluster of familiar stereotypes; corporate Americans, up-themselves Italians, down-to-earth yet plucky provincial Brits and Matt Damon playing a version of himself that wears a stetson, intersown with some fabulously-edited, genuinely thrilling scenes of classic 60s sports cars going head-to-head, which somehow manages to celebrate both US triumphalism and heroic British failure.

And the Italians in their Ferrari cockpits scowl like Japanese pilots about to offload torpedoes over Pearl Harbour. 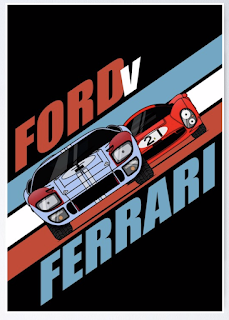 I was reminded of my visit to the Corvette museum in Kentucky a couple of years ago, though we are informed at the end that Ford GT40 is the only American-constructed car to win the 24-hour race.

Posted by Inner Diablog at 6:15 pm