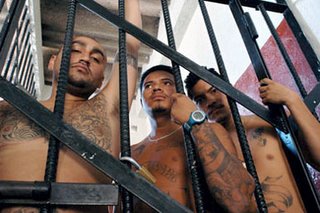 Yesterday a substantial joint force of Guatemalan soldiers and police launched an assault which ended in the recapture of Pavón prison, run by its inmates since 1996.

During this decade of virtual autonomy the prisoners had constructed their own secure township within the grounds, leaving the guards (on their payroll) to patrol the perimeter and manage the administration. Inside their fortress they opened churches of various denominations, bars, restaurants, tuck-shops and laboratories for processing class A drugs. Prisoner pets were fairly common; one kept a spider monkey, it has been reported.

8 of the 1600 inmates died in Monday's battle, most of these men apparently defending the two-story wooden chalet that was the residence of the narcotraficante known as "El Loco". (Not to be confused with the Presidente of Venezuela.) Another fatality was convicted killer Luis Alfonso Zepeda who had been earning around $25,000 a month from kidnappings and extortion and headed up the 'order committee' which effectively ruled the jail.

Another 8 had been killed there in August 2005 when a multi-prison war broke out between the incarcerated wings of the main maras. 31 died nationwide.

Pavón, located on the outskirts of Fraijanes (30KM west of Guatemala City), was conceived as an interesting experiment: a farm prison where prisoners could grow their own food. Unfortunately, they quickly diversified into other crops and started building homes on the grounds.

V has a vivid memory of a visit to Pavón with her uncle in the 80s. It appears he had a meeting about a loan with a bible bearing religioso that ran one of the churches inside; the jail was open to anyone that could name the person they intended to visit. She recalls gardens, shops, shoe-shiners and Chinese restaurants within this bizarre microcosm whose occupants apparently found generally preferable to the outside world.
Posted by Inner Diablog at 8:44 am