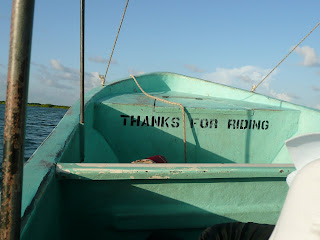 I've given up trying to explain the charms of Belize to Guatemalans.

They tend to have a mental image of an AIDS-infested land of no-good darkies lying supine in the sunshine which, after all, should be part of Guatemala anyway.

That the Belizeans seem to get more from less is perhaps an uncomfortable truth for many to face.

Ok, perhaps the Anglicised order and politeness here speaks to my ex-pat soul. But where in Guatemala do the bus drivers' assistants help women down with their heavy bags? (Near where I live now I've seen viejas practically having to jump from a moving bus!) And how many small towns in Guatemala have well-stocked libraries?

In Guatemala there are 44 murders for every 100,000 citizens annually. This compares favourably with the 46 next door in El Salvador, but less so with the 42 over in Iraq. When I last checked the biggest cause of unexpected death here in Belize was falling coconuts.

Belize is also multiracial in a way that say London may never be, for the UK's capital has been stocking up on conflicting otherness-es, whereas in Belize one quickly comes to see how the racial component of otherness is strictly meaningless. (Guatemala on the other hand is in a sense multiracist, with almost every socio-demographic distinction - class, colour, culture - holding the potential for antagonism.)

Within a few hours of my arrival here I was back in the habit of cheerfully greeting strangers. Some of them may look more like out-and-out bandits than the lean and hungry types back in Guatemala, but one immediately senses that it's just a fashion statement and that they're not about to start shooting up the bus.
Posted by Inner Diablog at 2:25 pm