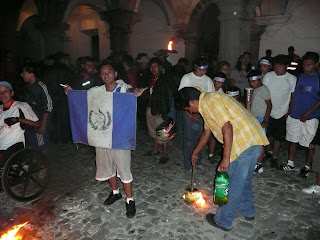 Today is Independence Day here in Guatemala, the pivotal date in what ends up running to over a week of constant celebrations.
Guatemala claimed its independence on September 15, 1821, when Brigadier General Gabino Gainza, taking note of what had already happened up north in Mexico, called a special meeting of notables to sort out their own formal emancipation.
The country then briefly became part of the Mexican Empire (not something you'd think people here would want to celebrate) before forming part of the United Provinces of Central America.
Here in Antigua groups of people from outlying towns and villages come to the Parque Central to collect a diesel burning torch - the independence antorcha - before running back home with it. It's all a bit like a deregulated Olympic torch run, without the Chinese heavies and screaming Tibetans. Torches are carried around on a national level too, with at least one going all the way to Costa Rica.

All of the nations of Central America celebrate their freedom from Spain on this day, with the exception of Panama which was later carved out of Colombia by the gringos for rather obvious reasons.
If anyone knows how, why, when this tradition got started I'm all ears.
This was the spectacular fireworks display in Antigua last night:

Posted by Inner Diablog at 2:22 pm