Trip Pic of the Day: Tikal 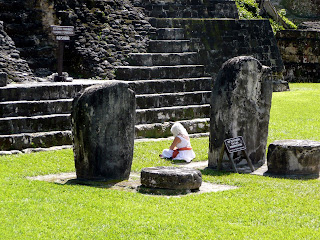 There weren't many of this kind of visitor to Tikal back in '88 when I first came here. I'd braved a bus journey twice interrupted, first by the genocidal local commandos known as Kaibiles and then by AK waving adolescents, most probably insurgents.

Nowadays sitting cross-legged at the base of the Temple of the Grand Jaguar is possibly the best way of experiencing it. At some point in the early 90s the staircase was closed off to clamberers.

This time I discovered that Temple II opposite is no longer open to frontal assault either. Instead a winding wooden staircase has been erected on the south side.

At present Tikal's Temple IV, the highest in the pre-Colombian world, is under-going a bit of nip and tuck and consequently, visitors are also unable to make it up on to the roof cone for the best view in the Mayan biosphere.

Some more pics of Tikal here.

Posted by Inner Diablog at 3:58 pm

Temple Cuatro is indeed my favorite, though that rickety staircase scared the hell out of me in 2003. Back then you could still climb the front of the other one...