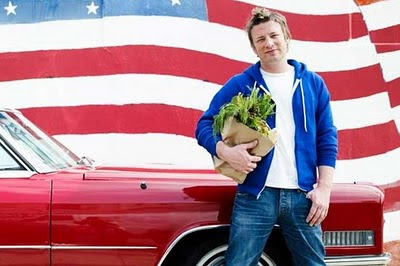 Last night we caught up with the first three episodes of this recent channel four series, recommended to me by the accompanying recipe book which I picked up from Amazon in January.

The cheeky mockney's first stop was LA, where he promised us his culinary education would be more gangland than glam. He visited the kitchens of Homeboy Industries, an enterprise for lapsed gangbangers and chilled out with former 'blood' Rigo who now cooks the breakfast at the Four Seasons. Together they went to Redondo Beach where Jamie borrowed the mackerel some Chinese men were using as bait to prepare what looked like first class fish tacos.

Oliver had earlier remarked that while Mexican food in the UK is all stodge, starch and cheese, but added that he was expecting to find something more interesting and authentic in the parts of LA he'd never before dared to venture into. Sure enough, he was soon initiated into mole and was reworking these flavours into an indulgent chocolate mole tart with cloves, chillies, cinammon, toffee fudge and dulce de leche. Jamie's Spanish is actually a form of pidgin Italian which he no doubt picked up off his old mentor Gennaro.

Then in the next episode, he was off to Wisconsin to hang out with colourful characters such as 'Hip' and Tucker Zing who introduced him to rodeo, Dutch ovens, calf castration and eating slabs of cow cooked by sticking them onto pitchforks before dunking them (unseasoned) into huge cauldrons of boiling fat. The scenery was majestic and the cowboys as enigmatic as characters in a Mccarthy novel.

We were intrigued by the way folk up there use coffee to keep meat moist and add an extra note of flavour to their roasts.

In part three Oliver rented a flat in Queens where he could sit on the bed with his Macbook Pro looking, for a change, like someone we might have to take seriously, because of all the intellectual books on the shelves around him. In the neighbourhood of Astoria he helped a wonderful Egyptian chef prepare flatbreads and secured an invitation to an unregistered Peruvian eatery down in Jackson Heights.

For his own Peruvian ceviche he combines the juice of three lemons with a pair of chopped chiles and a teaspoon of salt and allows his cubes of fresh fish to cook in this mixture for around two and a half minutes. He then adds chopped spring onions and capiscums, mint, coriander and maybe also mustard cress and fennel tops. It wouldn't be a Jamie Oliver recipe if he didn't also drizzle some extra virgin olive oil over it as well. (Here's a slightly less oily and salty recipe with camote and corn.)

Jamie's Big Apple adventure concluded with a supper party where he prepared the "shavishe" (rhymes with Italian mobsters' "capishe?") described above, and donated the funds thus obtained to a Colombian called Jorge who every night feeds 80+ illegals on New York's streets for free.
Posted by Inner Diablog at 4:59 pm

What a benevolent fat-tongued wanker Jamie is.