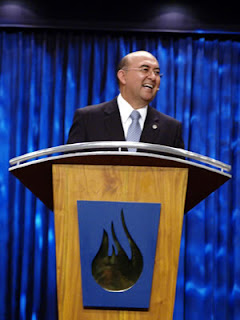 One of the highlights of Sunday mornings in Guatemala are the sermons given at 7:30am on local TV by Dr Jorge H. López, lead pastor of the Fraternidad Cristiana de Guatemala.

López sports a worldly, good-humoured outlook on life, and the Prostestantism he peddles is a long way indeed from the dourness of Calvinism. ("Nobody ever went to Hell for drinking a glass of wine," was a memorable soundbite from this morning's sermon.) In some ways it's akin to a self-help system, with López positioning himself someway between star motivator and stand-up comedian.

For the past couple of weeks he's been banging on about "DI-SCI-PLINA".

Now I have a hunch that Pastor López is actually rather close to sharing the view of many of us atheist-agnostics, that it is important to behave well even if NOBODY (not even up there) is watching, but today he drew the most applause from his audience when, whilst berrating those who might act like complete haraganes the moment their bosses go on holiday, he reminded them that 'Dios' is always watching. For me this rather undermined everything he'd previously said about the mice not taking proper advantage of the cat's absence.

This has always been one of the great ironies of organised religion for me: that it disproportionately appeals to those individuals who are incapable of conceiving of an ethical code not underpinned by a supernatural surveillance system.

The idea of spirit eyes (and ears) taking in our every action is of course part of the most ancient strand within human religiosity: ancestor worship. I've been swotting up on the Shinto tradition prior to my Japan trip, and it has caught my attention how the imagined presence of household spirits informed the evolution of almost all Japanese notions of duty, loyalty and self-sacrifice, and how a cult which was perhaps rooted in fear, over time became the basis of rituals where the emotions of gratitude and affection prevail. (...and yet where the 'higher ones' also participate in the joys and sorrows, and perhaps also the bad vibes, of family, commune and state.)

The coexistence of the Buddhist and Shinto traditions within Japan has allowed for a separation of the faith and the hope elements within eastern spirituality: a state of affairs that I find intriguing and will comment on in due course once I've hit the road.
Posted by Inner Diablog at 3:19 pm

"This has always been one of the great ironies of organised religion for me: that it disproportionately appeals to those individuals who are incapable of conceiving of an ethical code not underpinned by a supernatural surveillance system."

The existence of law is for the good of man, not for the satisfaction of the creator. The most basic example would be the prohibition on the unjust taking of human life. I understand that's not quite the alluring caricature preferred by atheists but it is the premise of the law.

The virtuous pagan may embrace a similar premise but hardly has a persuasive argument for why biologically evolved compassion or empathy (oft-mentioned foundations for non-theistic morality/ethics) are inherently desirable. In fact, the history of mankind would tend to support the opposite, i.e., the bad guys usually win.