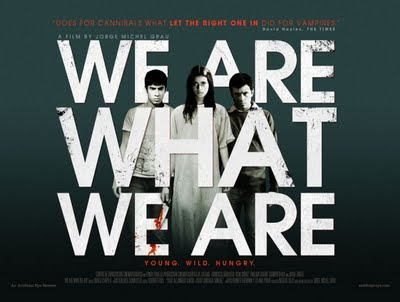 Mexico DF has become the preferred global shooting location for cruel social metaphors with no moral centre. Reassurance was hard to come by in Amores Perros and La Zona, and so it is too in this tale of a family of anthropophagites struggling to come to terms with the sudden loss of their patriarch and 'bread winner'.

The poster claims that the movie does for cannibals what Let The Right One In did for vampires, which is sadly not the case, because the Swedish movie had emotional depth. It has been well shot and the performances are generally strong (especially Paulina Gaitán from Sin Nombre), but having established that the widow and her three adolescent children have a particular penchant for munching on the soft underbelly of Mexican society, this becomes one more of the movies under-explored themes, along with 'el ritual', which although greatly advertised in the dialogue, never actually materialises and as a result one experiences the last act as a rush to completion.