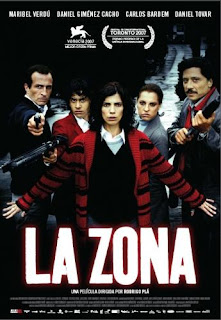 Across Latin America rich and poor both tend to over-compensate for the weakness of the state.

We saw in City of God / City of Men how the police are usually unwelcome in the Rio slums where organised criminality has stepped into the breach. Here in Guatemala there are also areas within the capital like La Limonada where the local cops have no beat.

Rodrigo Plá's debut feature on the other hand asks us to consider what happens when the professional middle-classes decide that they can be self-sufficient in terms of law and order. Welcome to La Zona, a fortress community in Mexico DF, a favela for the affluent SUV-driver, and the disturbing context for the socio-economic flipside of our very own rural lynch mobs.

The story begins to unfold on a stormy night. A high-rise advertising hoarding just outside La Zona becomes untethered and crashes down onto the stone pallisade, sundering it and temporarily blinding the community's CCTV eyes, a circumstance which tempts three young men in the auto-graveyard below to clamber up the twisted metal beanstalk that has suddenly turned up in their limited lives.

Disturbed whilst robbing the first property they come across in the upperworld, they murder a lone female householder and two of them are themselves taken out by La Zona's private security force. One of these guardias is in turn mistakenly terminated by a terrified retired resident, leaving the 'Assembly' to contemplate how to handle the disposal of four bodies without incurring interference from the outside authorities - and how to deal with Miguel, the youngest invader who escaped the scene, but not the compound. All but one vote for the 'an eye for an eye' approach.

They thus constitute a Lynch-mob in another sense too, for their eerie urban elysium, seen reflected in passing polarised windows, has its antecedents in the neighbourhoods imagined by the director of Blue Velvet. There are also some parallels in this scenario with JG Ballard's Cocaine Nights, in which a group of retired northern Europeans decide that they can do without the services of the Spanish state in their Costa del Sol resort.

Whereas Plá's conceit is that the residents of La Zona have happened upon a truly medieval solution to the medieval levels of income distribution in Mexico - both in terms of wall-building and the pent-up vigilante-ism that develops within these walls - Ballard was prompting us to think about the necessary conditions for a Renaissance: in Estrella de Mar the local tennis pro has to shit in a few infinity pools in order to dispel the spectre of endless tedium and set-up the conditions for a kind of cultural awakening, for "the first and last truth about the leisure society and perhaps all societies - crime and creativity go together, and always have done."

Compared to Fernando Meirelles's (Cidade de Deus) compelling realism, both visions are just un-realistic enough to be dystopic and fable-like; and the test of a good dystopia is surely the extent to which it convinces us that some of the dirty smudges in contemporary life could end up besmirching civilisation itself. La Zona certainly did a better job of filling me with dread and foreboding than Ballard's novel did. The evocation of the contrasting demographic contours of this city is chillingly effective, a back-drop of chronic Latin American injustice in which this parable becomes a chokingly acute episode.

My only misgivings were the feeling that the last ten minutes did little to top off the story and that throughout the earlier sections Plá and Santullo had been only partially successful in their attempts to represent the inner life of La Zona...and its conflicts. For example, felt they had focussed on a group of privileged male pupils in order to distract us from considering how many of the residents must have a day job outside La Zona.

Yet while I had a sense that there was some unrealised potential here, this was easily one of my favourite three films of the year.

Update: Time now to walk the dogs down the street V and I have dubbed 'Gringits'. The hostility of the residents in the thick-walled properties that line this dirt track is now that much more preocupante. We've already had to put up with one American aiming his hosepipe at us and a particularly nasty old woman who once shouted out "You don't belong here..my son is in the Army, he will shoot you". We live less than 100m from her home and this is a public thoroughfare!