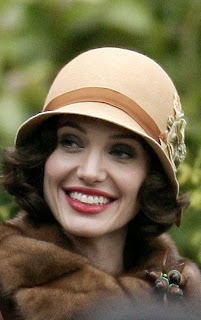 Clint's new film is masterful, not least for the way it synthesises a potentially unruly, multi-threaded 'true' story into a taut and gripping cinematic narrative.
Judiciously stylising the backdrop of 20s LA and to some extent the dialogue action as well, is one way the craggy old director has gone about  achieving this feat. Jolie and her flapper hats deserve much credit too, but this is an ensemble cast. I was especially impressed with Denis O'Hare's asylum doctor to the extent of re-watching his scene with Mrs Collins several times.
Oddly enough, the plot element suggested by the title is ultimately the least well formed, as the knockoff Walter passes through this story leaving a modest trail of unanswered questions.
GRADE: A-
Posted by Inner Diablog at 4:19 pm