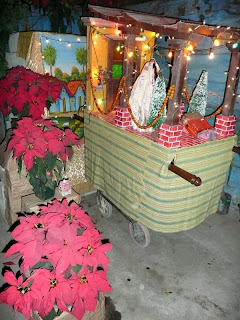 I find myself laid low after attending a posada last night. I'm cross with myself, for I had thus far managed to avoid serious intestinal setbacks since my arrival here in May.

Posadas are a Guatemalan tradition which makes public theatre out of Mary and Joseph's mythological quest for suitable lodgings in the days leading up to the birth of baby Jesus.

They kicked off on Sunday (14th) when a procession left our local church and made its way noisily around the colonia before arriving at a prearranged front entrance, which is duly knocked on.

In its wake follows a crowd of reasonably devout individuals with lanterns, and behind them a trail of gorras and juvenile delinquents. Since cachinflines were banned throughout Guatemala, the best form of entertainment available to the latter is letting off bombas and cuetes underneath each others' feet.

When the door is eventually opened, those who have come for a bit of prayer followed by ponche (fruit punch) and maybe a filled pirujo or tamal, proceed to swarm inside the dwelling.

In this picture we see the anda owned by our local church in Panorama. Mary and Joseph stand, rather awkwardly apart, beneath a fine example of terraza española, in front of a fairly typical Antigueñan doorway. Tomorrow the posada people will come again to fetch these effigies and the procession will move on to another home....and so on, up until December 23rd. The anda will be back in the church for Christmas Eve. (Here's another example of the form I found on Flickr, featuring a little model of La Merced.)

It's not unusual for bits of the traditional nativity scene in the receiving household to change ownership. V's sister Silvia lost a Wise Man a few years ago.

However, Don R has assured me that when the baby Jesus himself goes walkies (usually on the first night), a sub-tradition is being invoked. The pious pilferers are supposed to hold on to it for 15 days before announcing their delito and inviting the whole gang of seasonal spongers to their home for a final celebration.
Posted by Inner Diablog at 4:00 pm