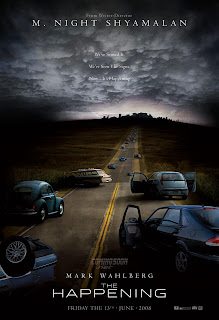 This poster for M. Night Shyamalan's latest offering has something the movie itself doesn't - a powerful evocation of a civilisation discarded by its suddenly suicidal adherents.

This is an oddly quiet apocalypse. As in the BBC's Survivors the unaffected head straight for leafy countryside, leaving viewers to imagine how the bodies pile up in the major population centres. If you want to wallow in ruination, watch Cloverfield.

Instead of frenzied neck-munching zombies, we have the rather more chilling scenario of people stopped in their tracks by a mysterious neurotoxin which induces them to seek out the nearest available means towards self-extinction.

The Happening has a quietist version of the ending of 28 Weeks Later too - which made me think that another, perhaps less idiosyncratic director, might like to take on a sequel, in order to explore this fascinating scenario in a, perhaps less preachy, way. (It's Happening Again?)

One of the conceits of the film is that the incidents grow ever smaller in scale, which for a certain type of viewer may mean that the action on screen becomes less and less interesting. It certainly grabs your attention in the first 10 minutes or so, but then struggles to keep it for the next 70 . (And unlike Saving Private Ryan there's no compensatory climax.)

Flaws it certainly has, but as I had been expecting to lose the will to live myself, I was pleasantly surprised by how much of this movie actually works. Critics will continue to point out that the director has shamelessly pilfered from his own back-catalogue and that the emotional reactions of the main characters are odd to say the least - though it's unclear in the end if this is a consequence of bad acting, bad writing, bad direction or just another artefact of the rather subdued backdrop, which has ended up throwing their somewhat half-baked complexities into sharper relief than one normally experiences in films from the resurgent genre that M. Night Shyamalan has meddled with here.

Posted by Inner Diablog at 2:14 pm