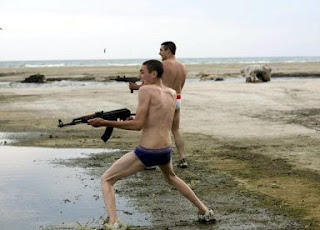 It would appear that the Camorra mobsters of Naples have failed to come good on their pre-Christmas boast that they would whack Gomorra-author Roberto Saviano before we were all tucked into our turkeys and/or tamales.

The LRB's Tim Parks described Saviano's 2m-selling book (which I have yet to read) as "fragmented, cumulative, insistent, dramatic." This thought-provoking adaptation is all of these things, and pretty stressful too. I can't recall such elevated, cinema-induced anxiety levels I put myself through United 93.

Comparisons with Fernando Meirelles's City of God are also again quite handy. Actors new to the trade - some of them with a history of mob involvement - have been cast here too. (Many speak in a dialect so dense that Italian subtitles were added for the benefit of non-Neopolitans.)

Meirelles presented us with a lead character that we were given to understand was a fair enough analogue of photo-journalist Paolo Lins, the originator of this insider's view of the Rio favelas. Matteo Garrone on the other hand, has denied us such an intruder from the world of human decency - instead we are deposited into the midst of a fully-enclosed and hopelessly debased environment. There appears to be no exit.

We found ourselves fumbling for structure at the start before each mini-narrative and the overall thrust of the movie itself took shape. Screenwriter Maurizio Braucci has condensed Saviano's Gomorra into five streams. Of these tales - interwoven by location only - three end up being traditional stories in which a character moves from a starting equilibrium through disequilibrium and on to a new form of equilibrium. In the other two, a character is shown on the path towards a fully life-changing event, but we are left to anticipate what might happen to him after that. Two of the sections appear to have been constructed primarily as illustrations of how the Camorra connect up with the world of aggressive, globalised capitalism outside of this region.

We were soon recalling our own roadtrip through this part of Italy in 2005. On arriving in Naples we spotted a battleship grey armoured personnel carrier guarding the first main intersection on the coast road. It was as if we'd entered a land under occupation. The first time we stopped for petrol an old lady sitting in a plastic folding chair beside the pumps advised us to keep our windows shut at all times: "Molto pericoloso..."

Those abiding prejudices regarding blokes from Italy that I've always had trouble shaking off - that there's quite often an aura of vanity and ridiculousness clinging to them - were redoubled down here in this institutionally-disowned conurbation, where just about everything appears tackier...and crappier than anywhere north of Mondragone.

Garrone has captured this stifling scrappiness and squalidity extremely well. And there's definitely something both sordidly mediocre and ludicrous about each of the intrigues explored here, perhaps none more so than tale tracking the destinies of two of the more independently-minded young men Saviano has dubbed "talking corpses" (see pic above), who chatter excitedly about living to thirty, whilst plotting to provoke their elders and deadliers by filching from a cache of automatic weapons.

Apparently it is Saviano's own view that repressive policies only make matters worse because imprisoning the capos allows the Camorra to freshen their ranks with new blood, like an army in wartime. Only the word can win, he has concluded, because it will only be by breaking the hold of the mob on the collective consciousness of the general population that conditions for a new culture can be seeded. (A consideration perhaps for politicians pursuing Wars on Terror and Drugs?)

Posted by Inner Diablog at 3:56 pm