The Art of Political Murder: Who Killed The Bishop? 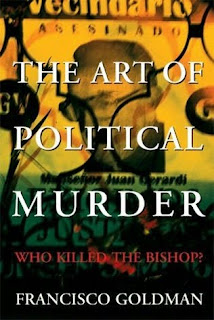 This weekend seven prisoners were beheaded by fellow inmates at Guatemala's infamous Pavoncito prison. A impromptu game of soccer ensued...
A similar fate befell one of the men found responsible for the political murder of Bishop Juan Gerardi on April 26 1998. This was Seargeant Major Obdulio Villanueva who, as Goldman reports, encountered a form of justice five years later in the Centro Preventivo:
"They hacked off the top of Villanueva's skull with a machete. Psycho scooped up Villanueva's brain matter with his hands and flung it into the faces of the cornered Sector 7 prisoners, screaming "Bring us Lima!" But Lima was nowhere to be found. They seized on a felt soldier doll that Lima kept by his bunk. The cholos decapitated the doll and shoved its head inside Villanueva's decapitated head, in through the neck and up, so that the doll's face showed through the brain matter."
Villanueva is one of the more interesting figures in this complex drama, especially for us. For it was he who had earlier carried out an on-the-spot execution of the milk delivery man employed by La Finca Carmona, the vast estate just outside Antigua where V was born. (Indeed, her father used to run the dairy business there.)
The name of this unfortunate milkman was Sas Rompich and on that day in February 1996 he'd made the fatal mistake of having a few Gallos before setting off along a road on which President Álvaro Arzú was gently hacking with his wife alongside him, with his EMP bodyguards - Villanueva included - in tow. Captain Lima, another one of the future Bishop-bashers, attempted to hault the on-coming Isuzu and ended up falling off his horse and breaking an arm. Goldman relates what happened next:
"The pickup then crashed into a parked car by the side of the road. Apparently confused and panicked, the milkman accelerated, then rocked into reverse, and another officer jumped onto the pickup's running board and reached in for the ignition, trying to bring the vehicle under control. Someone else shot out the rear tyres. A guardsman drove his car against the front of the pickup, blocking it, and someone went right up to the pickup with a nine-millimeter pistol in his hand, reached in through the window, and fired three bullets into the milkman, including one into his ear, killing him instantly."
The version(s) of events I had heard from locals before reading Goldman's book was significantly different, but such is the delight of Chapin anecdotology. Only last night V filled me in on another gruesome local incident which involved a naked corpse and extensive fingernail scratches on the wooden door of a house in San Bartolo.
Anyway, the man with the 9mm was Villanueva and for this act of over-keenness in defence of his head of state he was eventually sentenced to do some jail time here in Antigua. Indeed on the night of the Gerardi killing he should have been in his cell, which anywhere other than Guatemala would be a reasonably water-tight alibi. It turns out however that the prison authorities' only non-negotiable stipulation for their charges was that they attend the morning roll call,  and the Sergeant Major had been known to spend nights outside in Antigua's hotels.
Thomas Jones's LRB review of this book provides a strictly chronological account of the murder, investigation, trial and appeals process, thereby indirectly revealing that Goldman's story is so much more than this. The Guatemalan-born novelist has a broader scope in mind and successfully uses this most infamous event in the country's recent history to paint a fascinating and broad picture of my new homeland...even if some of it is tainted by the sensationalism outsiders are occasionally prone to! [That dastardly Captain Lima should have an army doll with him in his prison cell is just one of many dazzling little details that we are treated to, for which we have to thank Goldman's native storytelling sensibilities I'm sure.]
Two men I nevertheless continue to admire come out rather badly it has to be said. One is Álvaro Arzú, our neighbour and now Guatemala City alcalde, who as President was most probably at least vaguely aware of what was about to go down....or so Goldman insinuates. The other is Mario Vargas Llosa, who wrote a rave review in El Pais for a book which exonerates the military entirely from blame in the death of the clergyman who just the day before had blamed them almost entirely for the majority of atrocities committed during the civil war.  (Arzú, it seems hasn't himself been above handing out free copies of Who Killed the Bishop? by Bertrand De la Grange and Maite Rico.)
One of the juicier, more overtly chismoso parts of Goldman's investigation makes mention of a casa de citas in Zone 2 run by the mysterious gilded oligarch and femme fatale Martha Jane Melville Novella, linked via a series of expensive gifts to Gerardi's twisted housemate Father Mario Orantes (now doing time as an accomplice in the murder - he is thought to have let Lima, Villanueva and the 'shirtless man' into the Bishop's residence that night) and to Arzú's son Diego who apparently belonged to this upmarket homosexual 'tryst house' circle. With a hefty dose of supposition, Goldman also links Arzú's other son Diego to "a disco nightclub owned by EMP officers in Zone 14, where trafficked and heavily consumed. Someone who possessed information about all this, and who was himself in a powerful position - a general, for example - would be able to bend a number of people to his will, including the President."
Posted by Inner Diablog at 5:00 pm