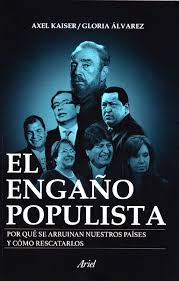 Disclaimer: this is not a full review. Instead it is part of an on-going dialogue with the text of the book as I make my way through it.

I write this whilst still immersed in chapter one. I am of the age whereby by the time I get to the end a particular tome, many of the useful impressions I might have made will have taken a trip down the rio Lethe, so there is no better time than now to address them.

It's also quite likely that I may have developed alternative preoccupations at that stage, or indeed find myself lacking in the time to sit down and plot out a more thorough report.

To begin with, a few words on the front cover, which features a somewhat fractional selection of populists past and present, and perhaps future. That two of them are no longer around and one at the top of the pile is at best a sort of political zombie, leads one to suspect that the book may involve some bayonetting of corpses.

It occurred to me that an interesting thought experiment might involve swapping out some of these faces with others from a more international crowd of suspects: Palin, Schwarzenegger, Farage, Le Pen, Erdoğan, Bin Laden even. At what stage does the very notion of populism start to lose precision as the faces in the montage change?

It is analytically simpler to assume that all the things you don't like in political thought and action are really just manifestations of the same phenomenon. Let's face it, we are all tempted to do this. So here we have a pair of Latin American political thinkers, both committed libertarians and committed anti-populists, who slip straight into the assumption that all populists are idolaters of intervention and the swollen state.

Some surely are, especially in their chosen Latin American context, but you only have to pan out a bit to take in gringolandia and you find populists dis-informing on the basis of what is supposed to be a close reading of Ayn Rand or perhaps just a hagiographic take on Adam Smith.

Across the pond in the U.K. we have, regretably, witnessed a disparate group of politicians with some sort of recognisably populist instinct attempting to exploit an amorphuous need for change in some sections of the population.

The Brexit referendum presented them with a once in a lifetime opportunity and they duly tricked many people into coming out to vote on issues that were only indirectly related to Britain's EU membership.

The political establishment over there seems dumfounded but is standing firm (so far) on the notion that 'the will of the people must be respected'. So, people voted for some sort of change, but the change they will actually get isn't the one they really wanted, but the political elite now feels obligated to give it to them anyway.

Many have remarked that the RNC and Trump's acceptance speech was 'scary' with the inevitable comparisons with the Nazis. Yet when the Third Reich analogy is dredged out, it usually comes with the implication that the subject of this supposed affinity between now and 30s Germany is deeply unpleasant, but not that deeply unpleasant.

Yet in at least one important respect, Trump's performace in Cleveland last night should be taken as 'scarier' than anything that happened 80 years ago. When Hitler stood up and spoke it did not require a panel of CNN punters like Van Jones to point out that his message was 'relentlessly dark'. The Nazis were a nihilistic death cult and knew it, and when Hitler came to power he delivered on this election promises, and then some.

What makes the spectacle of the Donald playing to his adoring public so disturbing is the fact that so many cannot see that they are tapping into the darkness.

So, comparisons between contemporary populist rhetoric and twentieth century totalitarian discourse will only take us so far. There's a twisted utopian vision behind the Bolsheviks, the Nazis and ISIS which is of a different order of magnitude compared to the nostalgic hooey that drives Trump's 'Make America Great Again' or Farage's 'Take Back Control'. (Fidel is I suppose an interesting hybrid case, both throw-back and throw-forward, straddling as he does the former era of ideological purity and the new one of saying any old thing to acquire and then hold on to power.)

Nevertheless, the extremists of the last century coined the notion of the 'big lie' and thus bequeathed to us the modern system of political mendacity. The polarities which gave us the Spanish Civil War, WWII and then the Cold War appeared, albeit briefly, to have been contained, but this involved trade-offs across the board, and the populists have had some noted successes around the globe when they suggest that all types of compromise are a form of corruption.

The end result is a hollowing out of the political spectrum: in Britain and elsewhere amongst so-called mature democracies, a collapse of the centre; in Guatemala the demise of the business-friendly, oligarchal figurehead.

This has freed up the populists to adopt a scattershot platform borrowing positions and methodologies from the old extremes of Left and Right and adding their own nationalist (and increasingly xenophobic ) inflections. The end result is a form of politics which presents itself as post-compromise, post-trade-off, but of course in reality, there are always compromises and trade-offs.

Just this morning I was listening to a discussion on the BBC World Service about how one might go about changing the attitude and behaviour of bankers. This is a bit like the problem of changing mentalities within any given society, but in microcosm. (In theory it should make the bigger problem easier to grasp, though when my wife compares changing the mentalities of her own family to changing those of the country as a whole, it actually makes the problem seen even more intractable!)

Anyway, regulation has been tried, but this seems to involve ticking boxes in an environment where there is always another box or two you haven't thought about, so the preferred option to giving bankers an ever expanding list of things you'd like them not to do, is to make them able to instictively behave ethically in the first place.

There still seems to be a system of incentives that will combine to undermine this approach, such as when the upside goes to the bankers, but any potential downside falls on society as a whole. Up until now the only solution to this seemed to be to allow the banks to fail, so that the consequences of perverse risk taking could be properly felt, but there has also been a more left-field suggestion of late: the proposition that we make senior bankers personally responsible for their investment decisions.

This got me thinking how interesting it would be if we could somehow find a way of making our politicians personally liable for those of their promises that have financial implications for the state as a whole.

Bankers do seem like a hard enough nut to crack first. Meanwhile, the problem of prevaling mentalities in Guatemala has always seemed to be one that game theorists should be allowed to have a crack at, though I think they would be gobsmacked at just how many people here appear to play the game in a way that is conspicuously against their rational self-interest.

Axel Kaiser and Gloria Álvarez declaim their 'profound faith' in the ability of a committed minority to bring about change. This makes me feel a bit old, frankly. But as I noted in a post earlier in the week, my glass is not always half-empty. So while there seem to be deep historical and demographic factors in this nation that would discourage overt optimism, the fact that many different societies around the Americas have found widely differing historical pathways towards broadly the same endemic political malady suggests that the solution might also be more generic than one might initially anticipate.

I've been thinking too how Michael Reid's Forgotten Continent: The Battle for Latin America's Soul could make an interesting companion piece to El Engaño Populista.

Reid is very much the outsider looking in, whereas Álvarez and Kaiser are clearly addressing an audience of insiders, and thus present their polemic from the outset as the case for not emigrating.

As an emigrant myself, one that has in some ways travelled in the opposite direction to the one suggested in the preface here, I am aware that exile is a deliberate expulsion from the body politic and that the voluntary form is no less so. This book catches me at a moment when I have been feeling simultaneously more entangled and yet also painfully cut off from the mess that populist misinformation has made of my native land's venerable political system.

It also features one minor misconception that I will pick up on before ending this first page of notes. It comes in the same context of grappling with what kinds of change may or may not be politically possible, and takes the form of a logical statement along the lines of...IF Marx thought history was predetermined AND we all know what a wong'un he was THEN it stands to reason that we are free to remake the world as we see fit.

Trouble is, this is a misrepresentation of Marx, or at least a compression of his thinking.  Like almost everyone else, he was deeply conflicted on this matter and tried to hedge his bets. He pilfered a teleological view of history from Hegel whereby all the hurly-burly at the sharp end of politics was in a sense determined by the deeper structural arrangements of economic and social relations and their inherent momentum.

When he was in a rather coldly analytical (i.e. German) state of mind, such as when he wrote Das Kapital, it did apparently seem to him that only dialectical processes in this cultural undercarriage could bring about real change. But when he palled up with Engels and wrote The Communist Party Manifesto he seemed to be enthusiastically shouting out an alternative model where individual and collective action would force history's hand.

Any modern professional historian not tied to the grand narratives of yesteryear, knows that neither of these perspectives is ever going to give you a complete explanation, and that beyond human beings and the distinct cultures they inhabit, random processes also present both barriers and gateways.

One last thing for now. I am something of a techno-optimist in a state of apostasy. So when Álvarez and Kaiser assert that 'disinformation is less and less costly to combat' my soul aches, and I recall all the pieces I have read recently about Internet echo chambers and social media filter bubbles.

PD: the author of the prologue, Carlos Rodríguez Braun, makes a reference to a quip by Churchil that I felt obliged to google.

It took me a while to locate it and I am not sure it sheds a particularly positive light on the great man's understanding of entomology, but it seems he did compare communists to white ants or termites. The way Rodríguez Braun embelishes the remark however, it comes out that socialists are in effect termites who think they are bees.

This in turn made me wonder if we can think of populists as termites who want everyone else to think they are bees, while knowing full well they are termites.

There is shocking news in the sports betting industry.

It's been said that every bettor must watch this,

Watch this or quit placing bets on sports...