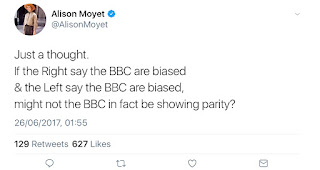 Funny old thing this BBC bias. The corporation is supposed to be ‘balanced’ but the sort of people it hires into editorial roles, even journalistic ones, are inveterate packers and purveyors of ‘narrative’.

My first proper encounter with this phenomenon occurred when my college at Cambridge provided facilities for a BBC panel debate hosted by Janet Street Porter. The Q&A session was especially lively, with many of my friends asking pertinent questions.

However, when we all subsequently piled into the JCR to watch the televised version, it seemed that the contributions of us natives had been utterly expunged and that pretty much the only questions retained in the edit were those asked by individuals that the Beeb had brought in from other colleges: controversial characters with pre-scripted enquiries designed to stir things up rather than complement the panel’s insights.

Then, a couple of years later, I was in Spain watching BBC coverage of the aftermath of George HW Bush’s invasion of Panama. A reporter asked an ageing man standing disconsolately amidst a large pile of rubble who he thought might now help him rebuild his home. The man’s reply in Spanish was succinct. The reporter turned to camera and translated it thus: ‘I think the USA will now assist Panama in its reconstruction.’ What the man had actually said was more along the lines of ‘The same fucking gringo who blew it up!’

Anyway, can it be at all surprising the a charter to balance out extremes can result in what appears like a perpetual bias towards the centre? And one can easily see how, in our contemporary political scene, just being less rural, less provincial, more educated or more ‘young’ can look like the basis for prejudice.