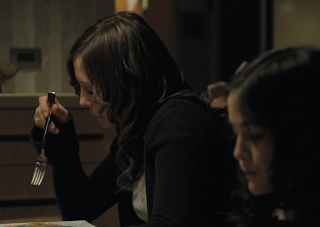 Orphan (2009) is — on the surface — yet another one of those movies where the lamentable table manners of its protagonists is unashamedly showcased.

But hold on. The director was Jaume Collet-Serra a bona fide European, and he's gone about this dinner scene with a bit of a knowing wink.

One of the ways that adoptee Esther's sinister abnormality is signalled is that she uses a knife and fork in the standard received, non-American way to partition her meat. 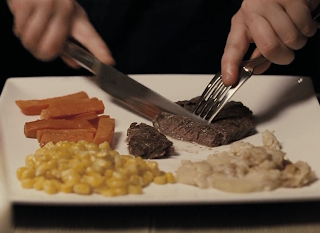 And this does not go unnoticed... 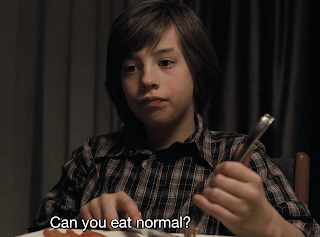 It made me wonder whether the fact that anyone who drinks a single bottle of wine starts acting as if they have a brain tumour is another Iberian in-joke at the expense of his Hollywood hosts.

Overall this is an entertaining bit of genre film-making, bolstered by a superior cast. It has to be said however, that it telegraphs almost every significant plot development well in advance. Almost every one. I really expected granny to get it.

I suppose Collet-Serra is to be commended for not having provided this family with a pet which could end up dead roughly midway through.

Prior to this he'd remade House of Wax (2005) with Paris Hilton amongst the early victims and later went on to direct The Shallows (2016) which belongs to that minority of decent movies with hungry sharks in them. He's also contributed to the Liam Neeson punching people phenomenon.

Next up will be Jungle Cruise (2020) with Dwayne Johnson and Emily Blunt. Superior casting again.

If the last film I reviewed played on a hurdy-gurdy phobia, Orphan might be said to be highly suggestive of Russophobia, or more specifically a fear of the occasionally alarming sensuality of slavonic women of the go-getter sort.

I'd strongly recommend Andrew Miller's novel Snowdrops as one of the better treatments of that theme. 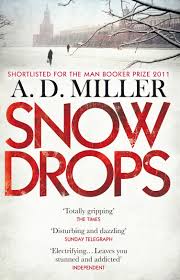 Posted by Inner Diablog at 6:04 pm