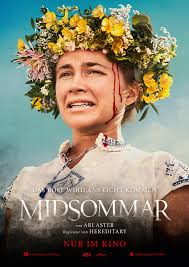 We came to this with a degree of of trepidation as Ari Aster's last film, Hereditary (2018), widely praised as a masterpiece, hadn't really worked for us. Visually stunning and otherwise inventive yes, terrifying...not really.

It was the old The Exorcist problem for agnostic horror fans such as ourselves: the supernatural alone won't unnerve us sufficiently.

Fortunately the genre as a whole encapsulates all kinds of other non-metaphysical phobias. Fear of the dark, of monsters under the bed, of birds, of children etc.

Midsommar's angle is the fear of over-intense, difficult-to-read Scandinavians. I've had it myself since my brief stint in the NGO department of the UN in New York.

A group of American grad student anthropologists head off to the far north of Sweden (actually Hungary) where one of them introduces them all to his 'family', a sect-like commune consisting of the sort of people you would more commonly come across selling kombucha in one of Antigua's eco-farms. 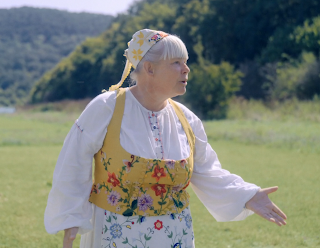 They are there to indulge in a nine day celebration of the solstice in the midst of a pagan pastoral idyll called Hårga.

Cleverly, the first really disturbing thing to occur sits right on the edge of what can be rationalised, especially when subsequently soothingly elucidated by someone who looks a bit like Jane Goodall.

This is a scary movie that deliberately eschews darkness; at least the sort brought on by a lack of solar radiation.

There's a trippy Eyes Wide Shutiness about these people and their runic rituals, yet the elements of black comedy are far more to the fore.

Florence Pugh now has that early Emily Blunt quality of improving almost any film she's in.