"What is Europe? It’s a harder question than you might think. For some people, it is merely a geographical entity. At the beginning of his short history from ancient Greece to the present, Simon Jenkins defines it as “a modest peninsula off the north-west corner of Asia”. Sometimes it includes Britain, sometimes Russia, sometimes even Turkey. The European Union includes Cyprus and Romania, but not Norway or Switzerland. Predominantly Muslim Albania is keen to join; predominantly Lutheran Iceland is not. Even the Eurovision Song Contest has included Israel, Morocco, Azerbaijan and Australia. So perhaps we should think of Europe as an idea, not a place." (Dominic Sandbrook)

For me ‘Europe’ is essentially that which survived and then flourished as a result of the Greek victory over the Persians at Marathon, an event now predominantly remembered in the title of a blue-riband athletic event, but also arguably the most decisive moment of in all of recorded history.

No Marathon, no Athenian experiment in popular democracy. No Marathon, no Plato, one of Democracy's earliest productive antagonists and a figure arguably more important to Christian theology than Jesus himself.

No Marathon no crucifixion anyway, because no Roman Empire. No Plato almost certainly means no Islam either, for this was also — at least in part — a 'European' faith in its development, having passed through the prism of Greco-Roman reasoning in order to achieve its ultimate form and status, just as Christianity had done.

Posted by Inner Diablog at 5:44 pm No comments:

Remember, remember, the eleventh of November

After turning 50 it is perhaps natural to reflect that 100 years is not so long ago after all.
And how soon memories become history; whether this is a process of softening or solidification is open to discussion.
The last time I was in Oxford Street with my father - ‘You don’t see any English faces here any more’ - he suddenly recalled passing along the same thoroughfare as a child with his own father and being disquieted by all the maimed WWI veterans that used to congregate there.
I also remember dim foggy November evenings in the early 70s when our home was passed annually by an kilted army pipe band, trailed by a throng of old men, mostly able-bodied, they too survivors of that conflict, which seemed more distant to me then than it does now.
Now I suppose they and their stories have marched off into a past that those with no direct experience 'remember' each year, apparently increasingly unsure of what is being remembered other than sacrifice. (Would this seem any more or less meaningful if Europe had not gone and done the whole thing again thirty years later?)
People say we can’t now think of WWI without thinking of Blackadder Goes Forth, but even that was a long time ago now. Last year's re-tread of Journey's End was a bit of a refresher, I suppose.
Prof. Niall Ferguson's article in the Sunday Times today reminded me that the moment the guns went silent - those same big guns that were responsible for 75% of all casualties - was one of 'pandemonium' rather than peace. 4 of the 6 great empires that had started the conflict disintegrated and a plague-like pandemic carried off the lives of more than four times the number that the war itself had. (We barely 'remember' the Spanish Flu.)
It was also the moment that belligerent nationalism started to look like a catch-all remedy. Reading about Macron and Merkel side by side in the train carriage yesterday almost brought me to tears, but once again the Donald elephant had to come along and trample all over the story.

Posted by Inner Diablog at 4:05 pm No comments:

Throughout the medieval and early modern periods it was England’s role in European history to not take the extremes of religious and political posturing across the channel all that seriously. Or at least to domesticate them for local consumption in such a way that their more deleterious effects were muted.

I think this is basically what Edmund Burke was on about, and I recall a teacher at school delighting with the tale of how a shipload of flagellants were mocked on arrival in Dover at one of the many moments of supposedly impending apocalypse in the Middle Ages.

So today Barnier warns of ‘a Farage in every country’ as if Nigel were somehow patient zero for the coming populist plague. No, Farage is the Middle England version of extremism, familiar to all connoisseurs of our history...and if there is to be any benefit from Brexit, it will be in the manner that it restores the nation to its traditional state of relative cut-offness from continental froot loops.

Still, just by virtue of being English-speaking social media addicts, we run the risk of being blighted by those other froot loops across the pond.

The leading article of the Spectator today concerned itself with the possibility that the statue-pullers and witch hunters general have settled for good on English shores and advised that ‘a great many people worry that minority opinions are seen as being not just incorrect but criminal. The response ought to be to urge common sense: to fight against the hysteria but in a calm way.’

That would probably be the British way...but the author of the piece is not alone in having detected a greater tendency on all sides of the discourse to treat alternative viewpoints not just as incorrect, but also morally defective, and those that hold them as non-persons. Until we find a way to sensibly discourage said tendency, the USA will continue to act as a handy early warning system, I suppose.

The Spectator concludes:  ‘In America, Democrats are now copying Trump’s tactics and the two sides are happiest trusting in their own virtue and the moral delinquency of the other. We have not yet reached that point in Britain.’

Posted by Inner Diablog at 9:41 pm No comments: 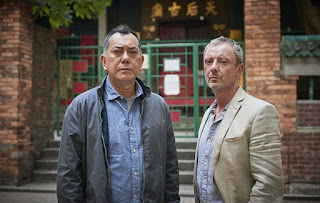 Posted by Inner Diablog at 4:16 pm No comments: