Some initial reflections on the introductory episode of Ken Burns and Lynn Novick’s documentary.

I suppose few nations are truly adept at looking at themselves in the mirror, but the USA does seem especially bad at it.

Last month I visited the National WWII Museum in New Orleans, which has an entire building devoted to explaining the course of the war in the Pacific, but the section covering the detonation of two atomic weapons over major urban areas is so tiny as to be completely miss-able.

Having watched just this opener, it does immediately strike to me that the USA is still not ready, culturally, for a no-punches-pulled interpretation of this conflict. The origins bit at least.

Many of the facts here were new to me, and interesting, but the underlying tone of much of the analysis rankled. It was essentially apologetic, at times seemingly determined to deflect as much of the blame from the US as an intelligent audience might bear.

So, we witnessed some archetypally arrogant and perfidious Froggy behaviour (followed by the inevitable capitulation), as well as that of duplicitous native political actors that the Americans ‘didn’t understand’

The French and Japanese presence was put down to a naked compulsion to exploit, whereas the Yanks apparently just wanted to protect freedom and stem the red tide - yet were slowly drawn into conflict against their better, anti-colonial, instincts.

Crucially, we are expected to believe that Eisenhower and his CIA underlings in Indochina were at their most ingenuous in 1954-5, precisely the moment Guatemalans were learning just how cynical and ruthless they could be.

This ‘all men are created equal’ business is the foundational doublethink at the heart of the American project and has led to some extraordinary bouts of hypocrisy over two and a half centuries or so. The irony that it is something Americans broadly share with the French is apparently lost on these film-makers.

It permits its users an enhanced perception of the failings of others vis-a-vis such a precept, whilst making them almost oblivious to their own.

Before watching episode two I think I shall need to have another go at The Quiet American... 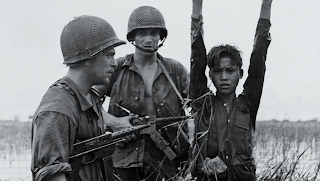 If I were young again and heading to Film School I think I’d like to write a dissertation on the difference between narrative and camera perspective and why some directors seem a bit oblivious to it.

Certainly one of the most entertaining novels I’ve read this year was Francis Spufford’s Golden Hill, set in 18th century New York. For most of the text I was thinking how long it would take for the story to be adapted for TV or even the big screen; there are plenty of very ‘cinematic’ moments in the drama. But then at the end Spufford delivers something of an apple-cart upsetting reveal, a well-disguised transformation of narrative perspective that ought to make the reader immediately re-consider everything that has occurred before if not actually start to re-read the whole novel from scratch.

This is one of those ruses of intelligent literature that should, by rights, make this one of those unfilmable books, yet somehow I still think the temptation to tell this tale anyway (and with lavish costumes) will remain.

Narrative perspective is often crucial to other aspects of a story, such as plot.

What a lot of otherwise talented directors don’t quite seem to appreciate is that swapping a first or even third person narrative for the apparently more objective showing rather than telling of the camera’s-eye-view can render an effective plot somehow less so.

Case in point an otherwise excellent Argentinian film we watched this week - El Otro Hermano - based on Carlos Busqued’s novel Bajo Éste Sol Tremendo. The performances, the grotty rural mise-en-scène ...all top notch. But about 80% of the way in the conclusion turned into one of those utterly predictable yet not completely necessary third acts that writers should try to avoid.

Now, I’ve not read the novel, but I strongly suspect that the narrative perspective was more firmly cinched to Cetarti, the outsider in this contemptible environment.

The film however established right from the first moment a sense of symmetry between the goings on around Cetarti and those around local would-be capo Duarte. As the last few minutes approached at least one more interesting and appropriate way of concluding the story was suggested to us.

Now I have to read the bloody book - if only out of curiosity about how the author managed to marry plot and perspective.

For me a ‘revolution’ can be said to have occurred when one group or class hijacks the state along with all its usual mechanisms for mediating between competing interests within that society. In this sense the accession of Trump is as much as revolution in the US as that of Chavez was in Venezuela, even Castro in Cuba. What it suppose it currently lacks is the clear sense that either he or those behind him will openly attempt to make more permanent this direct corporate power grab at the expense of America’s traditional political intermediaries. But it is clear that last November the choice was qualitatively different to the usual formulation at an American general election: a vote for the Donald was not really a straightforward vote against Hilary or even Barack, and it was hardly an endorsement of the GOP. If the citizens of the USA are not too careful they may end up stuck with the consequences of this 'revolution' in disguise for longer than their constitution normally allows. The groundwork for this was rather transparently laid by suggesting to the less sophisticated parts of the electorate that 'liberals' had been slowly effecting an unconstitutional revolution of their own.

A Tale of Two Cyclones

Harvey. This one was being widely reported in Mexican and Central American media from August 18, but the US was simply too distracted by falling statues and resurgent Neo-Nazis and was in effect caught completely unawares. When I left Houston on the 24th I had mentioned the incoming storm to several locals who seemed neither to know or care that much about it.

Irma. Almost from the moment this one started to swirl in the mid-Atlantic the story was all about the threat it would ultimately pose to Florida - even as it laid waste to several small islands in the Caribbean and then the biggest one. The victims out there in the archipelago face a lose-lose situation in terms of the news cycle now. If the sunshine state does succumb to Irmageddon, this news will dominate for days unless the Donald sets off Armageddon proper. And if the story turns out to be a massive collective ‘phew’ in the southern states, this will have much the same effect, leaving the daminificados of Barbuda etc. largely forgotten.

Posted by Inner Diablog at 3:15 pm No comments:

'What the fuck just happened here?'

I had a series of affectingly positive experiences on my recent trip to the American south. I have reflected however that if I were to try to somehow visualise them graphically, they’d all turn up disconcertingly proximate on the spectrum to some of my more negative experiences. As I think David Lynch has been at pains to suggest in his now-concluded Twin Peaks revival, there is a marked Jekyll and Hyde quality to many aspects of ‘Americana’.

In the past I have tended to divide the places I have visited into those that are merely ‘interesting’ and those that can somehow be elevated into the premium category of 'deeply or even disturbingly interesting', to which nations such as Russia (the USSSR when I was present), Japan and Mexico belong in my notes.

I’d add the USA, but as Lynch has demonstrated time and again, ‘interesting’ is far from being the most applicable adjective for an experience that more than occasionally teeters on the dreamlike, hangs the hyper on reality and which seems both so self-contained and yet at once full of worm-holes.


Posted by Inner Diablog at 5:47 pm No comments: