Around the thirty minute mark I found myself pondering "which complete and utter moron directed this?" So, off I went to IMDB and all confusion was quickly dispelled: Michael Bay. 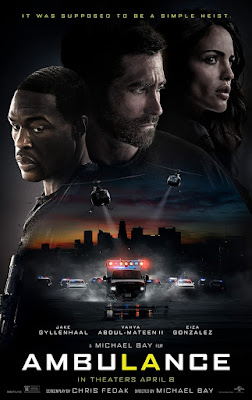 It's not completely without entertainment merit, yet the entire production (well almost, Jake Gyllenhaal is definitely going with the flow) is engaged in a largely losing struggle against Bay's directorial turns.

This is a signiifcantly shorter remake of a Danish movie called Ambulancen. I'd normally want to go back and seek out the source, but on this occasion I think I have surrendered enough of my life to this preposterous plot.

It would be great now to see Eiza Gónzalez in a more serious role.

Here she never quite breaks free from the way too beautiful for that job archetype. It made me think about the cities where this phenomenon is an actual thing. Bogotá to some extent, especially where khaki uniforms and day-glow waistcoats are involved. But Havana is ground zero. There's hardly a run down wooden booth where tickets or such like are on sale not 'manned' in that city by a young lady who'd usually be raking in millions as a model in the free world.

One strange parallel of the phenomenon is anachronistic sauciness sometimes applied to the dress code of fairly mundane careers in Cuba e.g. the fishnet stockings worn by many of the female immigration officials at José Martí international airport.

Bay has uncharacteristically restrained himself in this film in terms of establishing his female co-star as an overly-sexualised object of ogle-ment.

Posted by Inner Diablog at 1:06 am