The Western media has currently settled on three different ways of transposing the surname of the Ukrainian President.

I'm sticking to Zelensky as the spelling for both the former comedic actor and the latest addition to our feline contingent, concluding that any additional i or y would be largely redundant phonetically, as well as being not especially easy on the eye or indeed, search engine friendly.

I was remined today of one of the ways that the French media reproduce the name of Zelensky's antagonist — Vladimir Poutine — a rendition that seems inherently snippy if not actually profanatory.

Wikipedia provides some clarity however...

The Dictionnaire Historique mentions the possibility that the form poutine is simply a gallicization of the word pudding. However, it considers it more likely that it was inherited from regional languages spoken in France, and that some of its meanings resulted from the later influence of the similar-sounding English word pudding. It cites the Provençal forms poutingo "bad stew" and poutité "hodgepodge" or "crushed fruit or foods"; poutringo "mixture of various things" in Languedocien; and poutringue or potringa "bad stew" in Franche-Comté as possibly related to poutine.

The meaning "fries with cheese and gravy" of poutine is among those held as probably unrelated to pudding, provided the latter view is correct.

And so in a strange analogue of the Freedom Fries saga, poutine is currently off the menu in parts of the francophone world... 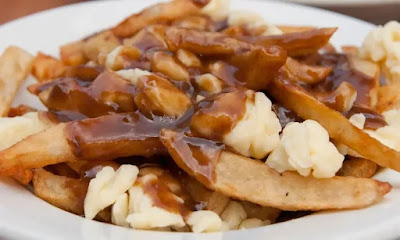 Posted by Inner Diablog at 8:06 pm