Bodies in the Bogs

Some of the most insightful analysis on the Z war in Ukraine is wrapped up inside long, slightly unwieldy Twitter threads, which can be irritating as 'mainstream' media is so much easier to absorb, which in a way is the very point being made here about how ordinary Russians are absorbing this conflict and its losses.

The thread presents some important perspectives, some of which take me back to a recurring family debate on the culpability of the foot-soldiers (and citizens) of autocratic, essentially fascist regimes engaged in carefully managing and distorting their local information ecosystems.

The cynicism of Putin in exploiting the painful folk memory of the 1940s by couching his invasion in terms of 'de-Nazification' is of course extreme.

I would like to think we live in a world where every human being is free to choose whether or not to participate in evil actions, but the reality is sadly more complex.

I have occassionally referred here to a book by American historian Christopher R. Browning about a group of German cops of socialist leanings dispatched to occupied Poland in 1942 as "Reserve Police Batallion 101" who then actively participated in Nazi atrocities.

Browning's conclusions in Ordinary Men are supported by several psychological studies. Simply put, only one in ten human beings will ever refuse an immoral order from a superior.

Another one in ten will not only accept the order, but elaborate on it.

The other eight will comply.

In my own experience none of us really knows where we are on this spectrum, and it may not anyway be a fixed position, as our reactions tend to vary according to the situation.

The other day I mentioned how Russia today possesses an entire parallel fact-chucking media infrastructure. One of the genuine novelties of this war has been the role played both before and during by OSINT (open source intelligence, including private satellite imagery) and this is also an area where the Kremlin is trying to catch up quickly.

This post below is duplicitously mimicking many of the now familiar tropes of an OSINT debunking of claims made by politicians and/or media spokespeople — in this case an attempt to demonstrate that the cyclist taken out in Bucha by Russian armoured vehicles was in fact acting as a decoy. 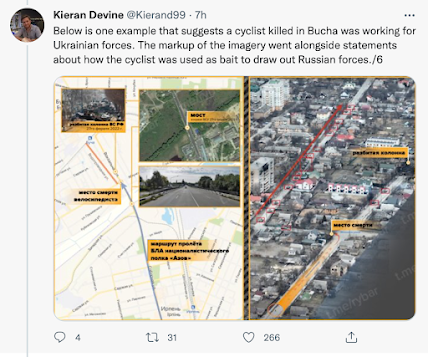 This follows a memorable earlier, failed attempt to evade responsibility for the woman's death by a Russian spokesperson appearing on SKY NEWS — he cockily suggested that there was no way to tell if the vehicles were Russian or Ukrainian and was duly owned by a simple zoom-in response.

The way the Russians handle truth reminds me of another tale told by researchers about chimpanzees, whose ability to lie is often hampered by their relatively uncontrollable instincts.

For example, if a chimp finds himself alone with an enticing pile of grub, he will often want to keep it for himself, but the urge to make the loud verbal call announcing the presence of a new food source to the rest of the clan* is overpowering, so all he can do is cover his mouth and try to smother it.

When the Russians murdered all those people at the Kramatorsk train station last week, they immediately screeched in triumph, only later to claim that it had to have been the Ukrainians as they no longer utilise that kind of outdated missile — a claim promptly debunked by the OSINT community.

* A gathering of apes is in fact known as "a shrewdness" of apes!

Posted by Inner Diablog at 5:37 pm