There are around 1 billion dogs in the world and roughly 85% of these are street or 'village' dogs. According to new scientific research by Raymond and Lorna Coppinger, those belonging to this latter class of canines are remarkably similar in shape and size the world over, and natural selection has turned them into near perfect scavengers whose proper niche is living alongside humans, not with them as pets.

Yet one of the first things you see when you live in the developing world is the obsession many ex-pats from wealthier countries themselves develop about converting these street dogs into their 'forever friends'.

There can be no doubt that many of these individuals are genuine animal lovers and I sympathise with their motives on many levels, but I can also detect yet another symptom of prevaling gringo attitudes which I find more than a little galling: the old white man’s burden of importing and imposing civilised standards on the manifest chaos of incomplete modernity.

Some of these self-styled rescuers come across as borderline misanthropes who appear to prioritise assistance for furries because the human realities of this land actually repel them. (At the next level up from cats and dogs one finds indigenous children — a demographic which attracts truly disproportionate levels of gringo goodwill in Guatemala, compared to say, their parents, or indeed the dirt poor non-indigenes of the plains.)

Just the other day I was reading with great amusement an exchange on a local ex-pat forum about a street dog adopted by a hostel in Antigua. (Viz pic below.)

The establishment had picked up the dog, dubbed her Manchita, vaccinated and spayed her and she now lives inside the hostel — which crucially keeps its doors open 7am to 10pm, so Manchita continues to wander out to explore nearby streets.

As a result, she keeps getting re-rescued by those who can't quite grasp that a dog might want to live a bit more like a cat. Manchita even has a collar, but that doesn’t seem to interrupt the cycle.

Some of the comments suggest acerbically that not only is Manchita in urgent need of re-education, so too are her new owners.

Mochi is the only one of our dogs that ever lived on the streets, and we can honestly say that it was she who adopted us, for Mochi began following us every evening and gradually shouldered her way into our house.

Unlike the other three she has retained the basic instincts of the highly-adapted scrounger. Some of her best tricks, like securely holding down plates (or indeed more complicated receptacles) while she eats from them, have since been picked up by our other two bitches. She has also held onto the slightly more irksome accomplishment of digging trenches to lie in when she gets a bit overheated, and thankfully Cherry and Yuki are still behind the curve on this. It’s hard for us to know if she grew up feral or spent her formative years as a house dog, but we are inclined to the latter view.

She used to have a beau called Trompas. Trompas had owners, but was left outside most of the time and assumed the role of guardian of our avenue, a position that comes with both rights and duties.

Most of the residents fed Trompas and many felt a great affection for him. When his owners moved to another area, he escaped and returned within days. Later on, an abortive attempt to formally ‘foster’ him by a third party resulted in his disappearance and presumed demise.

Since then there have been several incumbents in the role that Trompas carried out to such great effect. The last two have had distinct fates: one was shot dead by the bored security guard of a local gated community, the other was adopted after a successful Facebook appeal. The vacancy never lasts long. It’s as if there’s an understudy waiting in the wings. 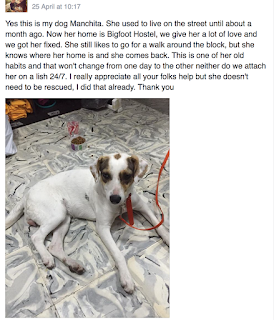 Posted by Inner Diablog at 4:36 pm No comments:

The Panama Papers have uncorked the geyser of middle class indignation.
For much of its modern history Capitalism delivered prosperity and development and the only people getting a really raw deal were the workers. And, as a rule, the middle classes affected not to notice too much.
There was a transition phase in the late twentieth century when even the proletariat seemed to be getting some of the benefits. Times were good.


There had always been a super-rich elite driving the process, but until recently at least, the middle classes have been very much along for the ride.
But then as the last century drew to a close the world's economy globalised rapidly, largely in response to technological change, and the middle classes have suddenly found themselves in the same boat as the hoi polloi.
There are calls for local, national solutions to this problem. Some of these are well-meaning and some of these are...well, from Donald Trump.
But this is a global problem - just like climate change - and local solutions simply won't cut it.
The ethical critique as currently presented by the floundering bourgoisie is hypocritical at best.
And it fails to recognise that just because the free of mind and free of wealth are oozing apart from the traditional nation state, does not mean these leaks can easily be caulked by legislation from within these moribund structures.

Posted by Inner Diablog at 8:17 pm No comments:

It was a little depressing to witness Niall Ferguson opinionating on the Syraqistan again in the Sunday Times this week - 'it takes a network to defeat a network'.
Not quite as depressing as when politicians tag the space as 'evil' - eschatological narrative ahoy! - but this notion that it's really only a technical problem that clever people could solve given half the chance, is in many ways just as absurd.
That he concluded with the suggestion that EU might be an appropriate network with which to counter the Islamic state only brought us closer to the real crux of the problem.
ISIS is the stand-out utopian project in the world today. As such it has the power to enthuse - and confuse - individuals who feel disconnected from the national identities into which they were born. The EU on the other hand...

Posted by Inner Diablog at 9:39 pm No comments: