Time passes but some things never change, such as the atrocious table manners of characters in American movies.
The more wealthy and sophisticated they are supposed to be - like this couple in 1993's Sliver - the worse it seems to get...forks held in the wrong hand, stabbing almost sorrowfully at the contents of the plate.
And in this scene it is the knickerless Sharon Stone who is supposed to be causing a stir. 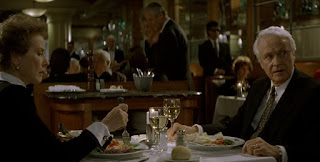 Even George Clooney does it. I bet Amal can barely bring herself to watch, thinking thoughts along the lines of 'Where was you brung up...the workhouse?'

Posted by Inner Diablog at 11:07 pm No comments:

Someone I would very much like to tell to go home is a superannuated Trumpista from Texas who occasionally corners me in the Bodegona.

Last time he insisted on warning me about the crazed policy proposals of Alexandria Ocasio-Cortez who, he hissed, was dead set on introducing post-natal abortions.

It really does seem to be the Donald's key strategy right now to pre- 'energise' these muppets - as it is more than likely along the way to skew the Democratic selection process towards the potty end of the spectrum.


Posted by Inner Diablog at 7:58 pm No comments:

I suppose Michael Winterbottom wanted to make The Trip to India but Steve and Rob weren't available, so instead he got Dev and Radhika and loosely fastened them to a plot about a road trip necessitated by the need to flee an arranged marriage in Pakistan.

Ben Keningsberg of the NYT began his review by suggesting he had been expecting a romantic comedy. 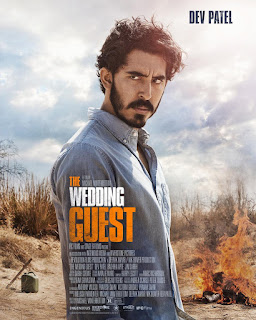 Really? He saw THAT poster and still couldn't get past Dev Patel's type-casting? It would have to have been called Two Funerals and a Wedding.

The thing is that I really enjoyed this movie. The dialogue is almost perfectly tight.

It's almost as if, after having to put up with Rob Brydon's prattling on for three whole movies, Winterbottom self-consciously eschewed the logorrhea to excellent, enigmatic effect.


Posted by Inner Diablog at 7:53 pm No comments:

Not so much a collection of tropes as one big trope, The Intruder's rigid predictability is actually part of its charm. Remember Unlawful Entry from 1992? Well this is that movie (along with several others) plus a few zeitgheisty tweaks. Race is seemingly not an issue here, yet as in Jordan Peele's Us, it kind of is, as the film's title can refer to either the original owner — sporting a red baseball cap in one scene — or the new one: a mixed-race branding guru from San Francisco who brings a particularly ghastly modernist sensibility to home improvement in the Napa Valley. He has a wife who is dangerously sympathetic towards his potential nemesis and a best friend who is one of those obvious dead-men-walking from the moment he is introduced. And as Ray Liotta did back in '92, so too does Dennis Quaid here with a trope-transcending central performance. 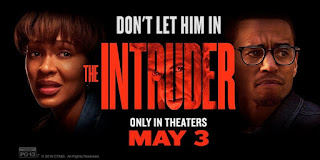 Posted by Inner Diablog at 6:51 pm No comments:

Perhaps the most disturbing thing about this is that - unlike say 1983's El Norte- you could imagine MAGA-cap wearing Trump supporters finding some soothing confirmation of their worldview here. In the main they are hardly what you would call knowledgable consumers of irony. At a stretch it could even be used south of the border as a propaganda film for ICE, a sort of soft alternative to the wall. Nevertheless, for liberals at least, this is a satirical, 'social' horror about undocumented migrants being used as captive slaves by members of the wealthy white elite in America. Yet I suspect it could just as easily have been set right here in Antigua within the milieu of a certain kind of gringo household complete with casual, grey economy servants. Such a switch would work primarily because director Max Pachman stresses two rather interesting points - that the view of the 'dream' of abundance from beneath is inherently corrupt and conjoined with noxious attitudes, and that said prosperity is ultimately also a travesty — for the affluence of those above is shown to be entirely based on the aggressive exploitation of an over-needy underclass operating in a more authentic economy and thus largely undeserved. And this is why, when (slightly unflattering) comparisons will inevitably be made with Jordan Peele's Get Out (2017), the movie I was most reminded of was the excellent La Zona (2007). 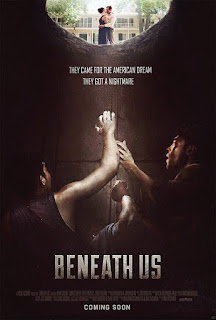 Posted by Inner Diablog at 3:51 pm No comments:

An essentially ethnographic proposition, which has been cleverly blended for added accessibility with a familiar pop cultural narrative, but then made subtly more weighty and mysterious by being framed as an ancient epic of the oral tradition. Think Nat Geo meets Narcos, meets the Godfather meets Homer.
And it generally works pretty well. The end result is that, despite its appearance here as a windswept, post-apocalytic wasteland, I ended up wanting to visit the Guajira peninsula and its Wayuu occupants and Gallego and Guerra's film joins Burning and Shoplifters in consideration for my favourite flick of 2019.
Quibbles. It makes the standard 'based on true events' claim at the start, but apparently there is no evidence that either the Wayuu or the Peace Corps had a significant role in Colombia's Bonanza Marimbera.
And if one is paying attention here, they might just as well have been dealing in coffee rather than weed, because most of the unfortunate events derive from character faults and social fault-lines that were there anyway. And on a couple of occasions I found myself thinking 'he really didn't need to do that', which would be a serious failing in any epic of the old school.
Rapayet's kingpin crib in the desert has to be one of the best stylised locations in recent cinema. 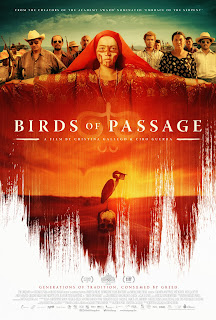 Posted by Inner Diablog at 2:11 am No comments: