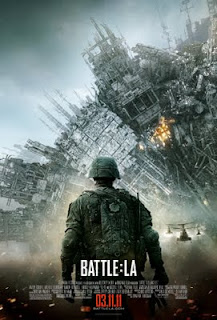 I'm sure at least one person has noticed that the blogging here has been rather low-intensity of late. It's not something I feel the need to apologise for, as I've been back in Blighty for the past few weeks assisting my mother with her move, and I suppose something had to give.

Now, I have managed to catch a few flicks, and one of these was Battle: Los Angeles, described by Roger Ebert as "noisy, violent, ugly and stupid", which made it sound like just the sort of thing I could use to unwind after a frustrating afternoon in London.

The set-up is fairly simple: a bunch of warlike ETs with some powerful, yet essentially conventional armaments, have landed close to coastal cities the world over and have begun an attempt to establish multiple beachheads because, we are told, they want our water. Standing against the invasion (of Santa Monica at least) is a group of grizzled US Marines under Staff Sergeant Nantz, played by Aaron Eckhart, a man who, on a previous tour against a more low-tech enemy, led his men into a non-specifically sticky end, and was planning to head off into retirement the very day the H2O-craving aliens turned up.

So, what you have is an opportunity to see America's fighting man behaving in an almost ridiculously gung ho fashion on the burned out streets of LA, and it's alright to scream ooh-ra at the screen every time one of the characterless 'bad guys' disappears in a shower of goo, because they are covetous invaders rather than insurgents. (er..)

What are the implications of all this? Are we to assume that America no longer really cares who it's fighting as long as there's someone out there to help preserve its militarist values? Should we think that this is really how America would prefer to see its antagonists, as entirely without face, without honour and without the potential for sympathy that comes with being an underdog in relation to US might?

Anyway, this is one of those ludicrous films that entertains (a bit) through sheer absurdity, but no amount of disorientating combat action can obscure the fact that the experience of this small unit of marines is possibly the least interesting way this particular scenario could have been beheld by a cinema audience. (But then Skyline did manage to present us with another highly underwhelming group of people from whose point of view to take in the destruction of LA.)

Michelle Rodriguez is clearly not especially worried about typecasting.