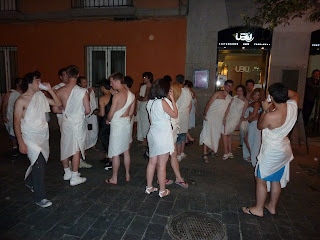 There are essentially two kinds of rampaging American college mob.

The Madrid variant represents a more or less feliz compromise. (Though, this lot quite possibly think they're in Rome.)
Posted by Inner Diablog at 5:16 pm 1 comment:

I've just finished watching the first (1974) episode of Red Riding. It's grim oop north, but was it ever that grim? The writers have said they set about trying to create a new TV genre called 'Yorkshire Noir' yet there's something almost science fiction-like going on here: this is such a stylised, palette-limited, dystopic alternative Yorkshire of a couple of generations ago that it could almost be something that originated in a graphical novel. Sean Bean was truly superb. "All this over a fookin' supermarket...?"

Paul Morley makes comparisons with The Wire. That's a bandwagon it's taken me a while to jump on, largely because of an aversion to David Simon acquired through interviews broadcast by the BBC. Now halfway through the first season I have to admit that there is indeed a lot to admire in this much chattered about series. I'd still have to quibble however that the scripts share some of the self-regarding qualities of its creator and the whole thing has some of the structural weaknesses of fictional drama penned by individuals with a non-fiction/journalistic sensibility.

Dominic West (McNulty) also appeared as Oliver Cromwell in another excellent Channel 4 series I caught up while here in the UK was The Devil's Whore. This too was readjusted, hyperreal history disguised as unchallenging costume drama, and unlike Red Riding it appeared to be determinedly beaming back a consistent message for our own times.

And how good is True Blood? Actually, I've come to realise I like just about any dramas set in America's pestilential south, but this is really terrific. I discovered it almost by accident when listening to the New York Times book podcast. They were being rather sniffy about the latest Sookie Stackhouse novel from The Southern Vampire Mysteries by Charlaine Harris (then at the summit of their bestsellers' list) yet somehow inadvertently sold me the HBO series based on the books. It has been created by Alan Ball (of Six Feet Under fame) and he brings a sort of unfettered Russell T. Davies sensibility to this tale of vampires coming out of the coffin in rednecky Louisiana.

So, three excellent TV dramas set against strikingly hyperreal backdrops, and one which is perhaps a bit too real for its own good.

Posted by Inner Diablog at 8:13 am No comments: 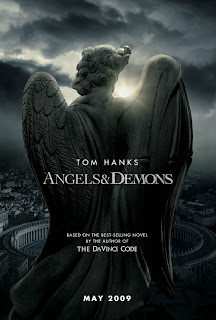 It's been a bad month for cinema this particular month that I chose to return to the UK. Since taking myself off to see Star Trek almost immediately after arrival there's been little to tempt me back into the Reading Vue. This week I'd reached the stage where I was just about prepared to go and see any old nonsense. Suppose Angels and Demons, I duly pondered, is just so awful it ends up being entertaining?

In the end I suppose it did the trick, though not being one for puzzles of any kind, there were parts of the first third which threatened to sedate me.

Overall I couldn't help thinking of Epitafios. Professor Langdon doesn't pop pills and chain-smoke quite like Lorenzo, but he does have a nack for solving complex symbolic brain teasers in time to arrive just before rigor mortis sets in.

Indeed, there's also much of the same sado-masochistic, Roman Catholic morbidity, the often shocking and wasteful violence, the sense of investigative incompetence, and the mass police casualties.

Grade: B
Posted by Inner Diablog at 9:50 pm No comments:

Atitlán vistas aside, most of this vid was shot in Mexico, land of mouth masks and Acapulco shoot-outs. But that dancing silhouette reminds me of the dickheads who turned up in Cornwall for the total eclipse in 1999.
Posted by Inner Diablog at 9:33 pm 1 comment: 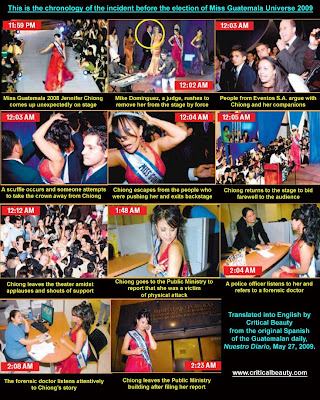 Yet another example of the kind of televisual chaos that Guatemala seems to specialise in. Last year's Miss Guatemala, Jennifer Chiong, hadn't been invited to this year's pageant owing to some prickly contractural issues, but decided to turn up anyway in order to hand over her crown. In came the heavies to forcibly remove her from the set and the event duly descended into chaos...

Posted by Inner Diablog at 6:12 am No comments:

A brief discourse on how the Guatemaltecos acquired their nickname.
Posted by Inner Diablog at 6:07 am No comments: