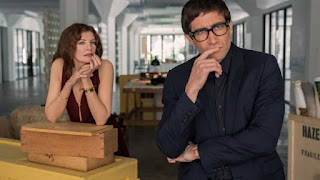 Dan Gilroy wrote and directed the generally excellent Nightcrawler and here he has reunited Jake Gylenhaal and Renee Russo for a considerably less biting satire on the art world.

Is Netflix the problem? It didn’t seem to creatively hamper Alfonso Cuarón.

Yet as with Soderbergh’s Unsane - which I think worked better - the immediate question seems to be what are so many famous actors doing in something so televisual?

The problem is compounded by the fact that they are playing characters that reminded me of people I used to rub up against in London’s media industry, many of whom were considerably less A-list and fascinating than they imagined themselves to be - and the trouble with making a movie about such folk is that it can end up having the same set of defects as its protagonists.

While Velvet Buzzsaw' was essaying satire I think I must have had the demeanour borne by John Malkovich throughout: somewhere between terminal ennui and self-disgust for simply being there.

As for the horror elements which kick in later on - a predictable sequence of grisly denouements - these are barely above Doctor Who level in terms of visual effects, scariness and mildly comic set-up.

Posted by Inner Diablog at 4:58 pm No comments: 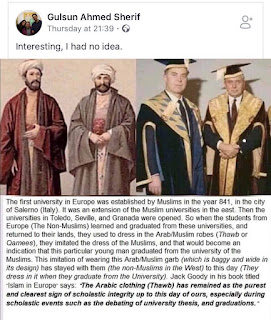 This was shared by a friend on FB yesterday.

Given that almost no statement in the above text is true, the essential lesson to be picked up here is surely about the ways that ‘fake news’ tends to override our instinct to fact-check before sharing by presenting us with carefully-calibrated untruths that some would actually like to be true.

It would not be all that harsh to describe this particular set of untruths as a form of Islamist propaganda which targets both modern Muslims and western liberals, with an aim to sow doubts about the foundations of western ‘arrogance’, whilst at the same time suggesting that the Islamic cultural tradition in Europe is somehow more indigenous and authentic.

Yet let’s not forget however that Islam was the third and last of the great monotheistic misapprehensions to emerge out of the middle east. As such it has its own very pressing authenticity problem which, in effect, requires constant glossing over.

It is like an MS Windows to Judaism’s Mac OS, a fact that shows how much easier it is to be hostile than admit being derivative.

In the seventh century Muslim armies started sweeping out of the Arabian Peninsula into the Med, overrunning territories we know today as Spain, Egypt, Turkey and Palestine - all firmly Christian at the time. This uncomfortable fact is glossed over more than most. (Though of course that faith had been largely imposed by the Rome and its successor states.)

Once Jerusalem was theirs, the Caliphate built its mosque on top of the ruins of the second Jewish temple (complete with fairy tale about Mohammed and his horse) in much the same way that Spanish Catholics would later build their cathedral on top of the what was left of the central acropolis of the Aztec capital, or indeed try to convert the Great Mosque in Cordoba into a Christian place of worship — by carrying out an aggressive act of suppression and replacement.

Today they would insist that the Dome of the Rock is at least equally Holy as the sites venerated by other faiths, which I suppose is fair enough, even if this penchant at times seems to suggest that it somehow got there first.

These arguments for primacy between the 'great' religions are perhaps the oldest extant form of culture war in modern civilisation.

(For the record. The medical school at Salerno was founded in the 9th century by Christian monks. It was later famed for 'Islamic influence', but as a result of the crusades and so hardly in the way suggested above. Bologna is in fact the oldest university in Europe. Academic dress at the time of its foundation was rather different to that today. The cap and gown are said to have originated in Oxford and Cambridge around the thirteenth century as warm-weather variants of clerical dress common around the region then. Western European clerical dress has complex origins in both late-Roman secular clothing and eastern, pre-Islamic attire.)


Posted by Inner Diablog at 9:26 pm No comments: 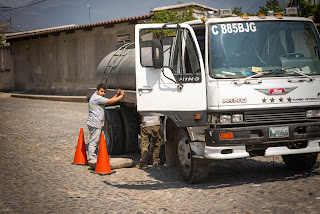 Whoever is (repeatedly) using an unmarked tanker to dump their sewage in this drainage outlet in El Panorama, please cease, or face the consequences.


Posted by Inner Diablog at 6:47 pm No comments: