The somewhat ludicrous Beto O'Rourke is blaming his own nation for Guatemala's present dryness. Now, one can wholeheartedly blame the US for a lot of things down here, but this particular bit of finger pointing is actually rather lame. Liberal self-flagellation in fact.

Meanwhile, the highest emissions per capita are in Qatar, Kuwait, the UAE, and Saudi Arabia.

Stopping this catastrophe is going to involve a while load of condoms as well as little Swedish girls taking the boat rather than the plane.

And the Mayab tended to suffer from near-apocalyptic droughts long before the greatest nation on earth even existed.

Posted by Inner Diablog at 8:57 pm No comments:

Isabella Eklöf's debut film is extraordinary. Can't quite see why it is only scoring 5.6 on IMDB. Critical reviews from the festival circuit were almost all positive, though an extended rape scene (comparable it would seem to the one Gaspar Noé shot for Irréversible) was cut from the version we saw.

I'm not sure it was strictly necessary. The edits between scenes with implied information withholdings work especially well. And this does seem to be as much as chilling exposé of toxic femininity as its gender inverse. 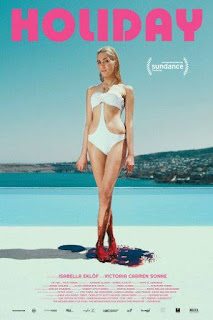 Victoria Carmen Sonne's performance as Sascha is on-the-nose. I've come across a trope-tastic trophy wife here in LAG, with whom - on first acquaintance - I was struck by the most profound, direct, eye-to-eye experience of 'lights are on, but nobody's home'...ever.

Narcisismo perdido; cascarón de carnaval; painted and hollow. Sascha is right there, and yet she isn't.


Posted by Inner Diablog at 8:04 pm No comments:

‘Our lifestyle is destroying the environment of our country… creating a massive burden for future generations. Corporations are heading the destruction of our environment by shamelessly over-harvesting resources..the next logical step is to decrease the number of people in America using resources. If we can get rid of enough people, then our way of life can become more sustainable?'


A reported snippet from the manifesto of Patrick Crusius, the El Paso shooter; seemingly a ‘white supremicist’ in much the same way that David Attenborough is.

As I have noted before self-styled terrorists and racists are often just people who have a general problem with humanity, whilst erroneously imagining that their beef is only really with part of the species.

Like David Attenborough I am something of an atheist and a bit of a misanthrope, so I have some sympathy with the problem if not the solution.

The experience of ageing, of being part of modernity is sadly often one of witnessing ruination — of oneself and of the people and places one senses are being slowly wrenched away as time passes.

Take Antigua. It’s not the place I first came to in the 80s. Like Crusius I could start to play the blame game.

For a start, it’s possible to have a generic rant about rising population, over-stretched resources, moral decay, corrosive capitalism and so on while sounding both bewilderingly conservative and radical-lefty at the same time.

Where it gets a bit more interesting is when one starts blaming specific groups of people, particularly those than are in some way other to one’s nostalgic fantasies.

If these invasive/destructive types are generally better off or more powerful than oneself, one is usually deemed to be a ‘terrorist’, especially when one takes up arms against them. Here in LAG these might either be braying gringos or affluent hedonists from the capital.

If however they are less well-off and powerful than oneself — in the case of Antigua ‘indios’ from outlying communities who pile in to sell their crap and generally clog up the streets — then one is typically deemed to be a ‘racist’.

Crusius named Mexicans as his problem. Not the ones in Mexico, but the one’s he believed were churning up his turf.

If this is racism, it’s rather different to the kind of racism that drove certain Germans eastward in the last century in the hope of finding new space in territory then occupied by those they deemed lesser beings. With the Nazis one could argue that the ‘hate’ started first, its targets blamed for nothing other than their own existence.

With the likes of Crusius there’s surely something more situational going on, where Hispanics crossing the border become the surrogate for a much deeper problem with his existence as a member of Homo Sapiens.

Bernie Sanders observed at a recent Democratic debate that “We’ve got to ask ourselves...why are people walking 2,000 miles to a strange country where they don’t know the language?” Given that many of the indigenous people in parts of Guatemala struggle a bit with Spanish, they may not actually have to travel all that far before they start to experience communications difficulties. Yet the question is valid. Why indeed? I can imagine the sort of answer that Bernie has formulated in his own head. And the kind that he will expect his voters to come up with. These will, I suspect, be overly-informed by first world biases that beset both Left and Right in the US. Just hearing the question asked this way sets off my own shithole country dog whistle alarm. Google ‘Northern Triangle’ and see what you get. When I did it this morning the top item was titled ‘Central America’s violent Northern Triangle’. The term’s Wikipedia entry does at least explain that it is was originally formulated to frame discussion of economic interactions between these three nations, before finally moving on to the rate of intentional homicides in these parts. Intriguingly, this is also a way of looking at the northern part of the isthmus without considering Belize. Aside from the economic ties there are other ways in which this omission is instructive. Belize is a lot smaller, yet relatively more violent these days than the other three. Despite this, it is almost never mentioned in the context of factors driving Central American migration to the US. Now Google the top 100 news items on Guatemala and then do the same for Belize, before scoring them as positive, negative and neutral. I am sure you will surely start to perceive the signs of media bias even within this rather limited sample. President Trump did a safe third party deal with Guatemala supposedly in order to reduce the number of asylum seekers from El Salvador and Honduras yet Guatemala itself, (rather slightly) the least violent of the three countries, regularly sends more migrants north than its neighbours. Many of the Guatemalan migrants being detained right now at the Mexico-US border appear to hail from rural areas with a pronounced indigenous majority. The assumption in the external media is that these less-developed areas of the country must by definition be the ones with the greatest prevalence of the traditional litany of problems, the highest concentration of ‘appalling conditions’, as AOC puts it. They must also be the ones where discrimination is felt most severely. These assumptions are rarely if ever examined properly.
In Guatemala the intentional homicide problem has tended to be highly localised — concentrated in specific micro-geographies — which have been used in effect to tar the entire the country with the same brush. (As if one could only ever talk about Italy in terms of the conditions prevalent just south of Naples.) Many of Guatemala’s rural departments with significant indigenous majorities have murder rates more comparable with Guildford, Surrey than New Orleans, Louisiana. Gang-related crime is also largely absent there. So to provide an answer to Bernie’s question that takes more than a moment’s reflection, one may have to look at both environmental and demographic factors more closely. One is also going to have to set aside first world conditioning which would otherwise project certain prejudices back onto this problem. For many of the underlying causes may not quite suit the standard progressive discourse.
Posted by Inner Diablog at 6:07 pm No comments:

I first came to Guatemala when I'd just turned twenty-one. My initial experience of the country was what you might call 'not propitious'. The vehicle that I was travelling in was pulled over by guerrillas and I faced a row of AK-toting teenagers.
After this I made it safely to Santa Elena, crossed the causeway to Flores on foot, wolfed down a mojarra with some Gallo and have retained my fascination and affection for the country ever since.
So it pains me a little to read articles like this. One is left to conclude that at least the likes of Donald Trump come straight out with the 'shithole country' trope.
American liberals on the other hand, produce an argument like this that is pretty much the same thing, but couched in terminology that makes them feel good.
Statistcs 'compiled by non-profits' supposedly point to persecution of the LGBTI community here, but if one adjusts for the prevalence of powerful, interfering foreign organisations in Guatemala compared to many developed nations, how great is this danger, relatively?
The problem is that this form of analysis has the inevitable tendency to associate countries like Guatemala with only the worst aspects of their social and political conditions. Just imagine that you were to do the same for the ‘greatest nation on earth’.
To state that Guatemala is incapable of serving as a safe third country - without even reading the relevant agreement - is American liberal dog whistle for ‘shithole country’. 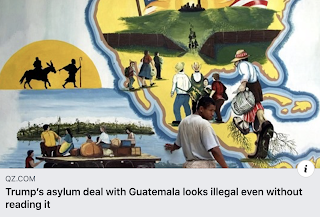 Posted by Inner Diablog at 4:41 am No comments:

There's a certain well-lubricated set of gringos of an advancing age here in La Antigua. In the past we've referred to them as the 'Big Fish', not without a dollop of British sarcasm, for they are appear to be textbook cases of 'Big Fish In Small Pond' syndrome.

The epithet is appropriate in another sense as well as they generally go about with the aspect of a fish that has been dragged down the road by a dog.

In spite of this, many have married much younger local women — some on multiple occasions — and having opened some small bar or restaurant prance around town as if they were captains of industry or serial entrepreneurs worthy of a Forbes profile.

Another common feature of the heavyweight lightweights that make up this gang — this mara — is that they appear to have scant regard for the rules and regulations of Guatemala.