Over the past few weeks five times I have made arrangements with locals to meet at my house and on each occasion they have failed to show up. I might add that the assignations in question were generally a good deal more in their interest than in mine.

Is there ever any attempt to communicate an excuse, an apology etc? No.

Sometimes the offending party tries to put in an appearance at an alternative time and date of their own choosing, still without warning or cover story. I have now decided never to open the door in such circumstances, not in the vain hope of thereby providing an education in civilised manners, but in rather more punitive determination.

It is for this reason that one individual in our neighbourhood has become a constant source of wonder. She carries a watch and examines it with the old-fashioned assiduousness of the white rabbit in Wonderland, though without his propensity for punctuality fails. And deep though we are in the dry season, she is also never without her flowery umbrella – signs of a preternatural preparedness quite anomalous in these parts.

Having offered to produce for us, twice weekly, tortillas of black and yellow corn in the traditional manner, each time she has come to deliver them almost exactly five minutes in advance of the agreed time. And when I emerge, regards me as if I have kept her waiting an eternity.

It is for this reason we have started to have our doubts as to whether she is Guatemalan at all. She has the slightly off-putting appearance of a steely-eyed, middle-aged man in an elaborate draggy disguise, complete with heavy, oversized, bloke's shoes, and for that reason we long ago gave her the nickname of 'El Chapo'.

Her skin is almost deathly pale and her accent is hard to place in a Chapin context, though there are rumours that she and her brood hail from Amatitlán or thereabouts. The truth is that she appeared one day out of nowhere, and yet, hoy en día, there is seemingly no-one better informed about behind-closed-doors activities in the district.

In response to Tripadvisor's somewhat unbalanced list of the top 'destinations' in Central America, here is my own, more reasoned selection. I have taken it as red that 'destination' implies a certain number of hotels and restaurants, plus a hub-like location for accessing other nearby sites and activities. 1) La Antigua Guatemala: Well, of course...2) Playa del Carmen, Quintana Roo, Mexico: Hippest place in the western hemisphere. 3) San Cristóbal de las Casas, Chiapas, Mexico: It is not unheard of for people to prefer this down-to-earth yet lively mountain town over La Antigua.

4) Panama City: A larger version of downtown Miami tacked on to a smaller version of Old Havana...with more than a hint of Vegas. What more could you want?

5) Tulum, Quintana Roo, Mexico: Somewhat over-tailored to affluent hippies (i.e. employees of New York magazines), you can't take away from it the best beach for thousands of miles.

6) Campeche, Campeche, Mexico: An under-visited fortified Spanish burgh staring into the beautiful Gulf sunset. A little low on evening activity, but plenty of Mayan interest points beyond the city limits.

7) Granada, Nicaragua: Emerging from neglect, this is Nicaragua's colonial showpiece, with its lovely Calzada leading to the shore of Lake Nicaragua.

8) Lake Atitlán, Guatemala: Panajachel is the Bohemian go-to destination on this most beautiful of lakes, but there are numerous other characterful villages along its shores.

10) San Ignacio (Cayo), Belize: Grubby in itself, but an undoubted hub for perhaps the most rewarding eco-tourism opportunities in the region.

11) Livingston, Izabal, Guatemala: Guatemala's Garifuna enclave, and gateway to the Rio Dulce and Lake Izabal, perhaps the most stunning landscapes the country has to offer.

12) San José, Costa Rica: The most approachable of Central America's capital cities with a central core that can easily be explored on foot. The dining scene is not so bad either.

13) Placencia, Belize: Relentlessly gentrified over the past couple of decades, yet the veneer of first world sophistication is refreshingly thin in places. Best beach in Belize.

14) Palenque, Chiapas, Mexico: Access point to one of the greatest of all Mayan sites, plus the waterfalls of Agua Azul and Misol Há.

15) Flores, Petén, Guatemala: Set on an island close to the shore of Lake Petén Itza, this is not just the kick-off point for Tikal, but also a delightful mini-destination in itself with an appealing, almost Mediterranean vibe.

16) Caye Caulker, Belize: An almost unavoidable backpacker destination right on the reef, offering some of the best and cheapest snorkelling and diving opportunities in CA.

18) Chiapa de Corzo, Chiapas, Mexico: The original state capital, and where one boards the boat to explore the majestic Sumidero canyon.

19) Cobán, Guatemala: A centre for coffee and more recently, stronger stimulants, the city offers a pleasant stop-off before the approach to Lanquin and Semuc Champey.

Plus five other significant spots in the region which I have yet to visit, yet which I suspect might well have made it into the top 25...

Posted by Inner Diablog at 2:25 am No comments: 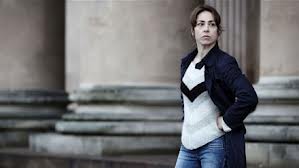 The last ten minutes of the very final episode of Forbrydelsen must have come as a shock, if not a disappointment to many of the show's long-term fans.

Three of the characters chose to behave in ways that required impromptu and unlikely feats of memory. Kamper, the PM, had to recollect in an instant that he was a politician who puts power above all other personal feelings and interests. Zeuthen had to remember that he was heir to a powerful family-run multinational and set aside all previous capriciousness...and Lund had to somehow forget she was a police office and become, well..Danish Dexter.

These sudden lurches into ethical compromise (or in this particular instance of Lund's actions, un-compromise!) have become a familiar trope of these Scandinavian series. It's one of the reasons that Forbrydelsen, Borgen, The Bridge etc have fallen just short of the quality of Engrenages (Spiral) in terms of character consistency. The French series wins, because it convincingly bakes the wobbliness of moral accommodation into each and every one of the leads and that makes for a more complex experience. In part it's because much of what occurs in the plotting of The Killing seems to be done for our benefit as the viewer, whereas in Spiral our 'presence' as onlookers is made to seem comparatively nonessential.

Anyway, considering the choices facing the creators of Sarah Lund, I have found a way of making sense of the one they eventually went for. The obvious alternatives of death-in-the-line of duty and happy-ever-after would surely have seemed equally, if not more incongruous.

Did Lund put a bullet in Reinhardt's head because he had taunted her that he expected to escape justice? It's not an explanation that makes much sense because Lund had no way to know that Kamper and Zeuthen were re-conforming to type back in Copenhagen, and her evidence about the hotel door code certainly looked promising.

If some of the vigilante urgency of 'GM' had rubbed off onto Lund, the writers should really have shown us how this came about by appropriately developing the scenes in which the pair interacted.

Perhaps GM didn't kill five people entirely in order to avenge the daughter he barely knew. He might well have done it in part because he was a smart man who resented that the leaders of the organisation that employed him were utterly unaware of his existence. The rage inside him was that much easier to project onto Zeeland once he had a more concrete grievance.

And on reaching this conclusion it occurred to me that Lund didn't kill Zeuthen's sidekick because she knew he would wriggle free of her persistence and rigour. She killed him because it was a only way of dodging the nicely resolved life which was awaiting her at the end of the case – with her mother, Mark and his new family and even her long ago jilted boyfriend all keen to move into her self-enforced sanctuary of solitude. That at least, would have been in character.


Posted by Inner Diablog at 5:47 am No comments: