Opposition to the process of a negotiated withdrawal from the EU has been varied, but in simple terms there have been four main tendencies in Parliament. The first three are quite easy to identify: the no-dealers, the no-Brexiters and the DUP.

The fourth isn’t quite as obvious, but it is essentially a less intelligible, and certainly less principled, tribal tendency.

Both the main parties have an eye on future electability, while being aware of an awkward disconnect between their base and many of their MPs. The Labour Party for example is grounded in a Remain-leaning membership, but dependent on less woke folks in the working class constituencies they will have to win to return to power. Hence their pie-in-the-sky, supposedly ‘jobs friendly’, non-policy after the referendum.

Meanwhile, on the government benches, fundamental disagreement over the European project has long been a critical weakness, threatening to sunder the Tory Party, which is ironically why Cameron originally came up with the cunning plan of promising a referendum he didn’t think he’d actually need to hold.

In such circumstances one could say that neither party can respond to the Brexit referendum result coherently without compromising internal unity and/or their next manifesto.

The big mistake of the no-dealers in all this has been to imagine that their best interests were being served by tagging along with the other recusants, including the DUP, who care a lot about one issue, but not so much about Brexit at all. Rees Mogg and co have perhaps stumbled on their ‘half a loaf better than no bread at all’ analogy a little too late.

The no-Brexiters on the other hand, appear to have been tactically-astute thus far, though they were handed a critical lifeline by May’s own mega-gaffe - calling an election and losing her majority - since which EU negotiators been able to exploit her single-issue, DUP weakness pretty effectively.

To have ‘her’ deal pass now, she will need to get both the no-dealers and DUP to capitulate fairly comprehensively in the next few days. She also needs to induce a sense of weariness in a significant number of opposition MPs.

The no-dealers are almost certainly the only grouping in Parliament who care enough about Brexit to cave under this pressure. If the deal, and its backstop, remain un-altered, the DUP are likely to remain non-compliant.

Still, a more general sense of exhaustion could yet get the PM over the line.

Our two party parliamentary system has always been notably more tribal, - adversarial even - than numerous European counterparts, but until the combined effects of globalisation and its reaction (populism), started to hollow out the centre, this hadn’t led to the sort of intractable, conspicuously brainless ideological positioning in the legislature that has become all too familiar in the US.

Posted by Inner Diablog at 6:47 pm No comments:

The trouble with referendums is that they feed the illusion that politics is all about binary choices that lead to fixed political destinations. Yet one of the reasons we have a Parliament is that political decision-taking is to a very large extent a never-ending negotiation, where the goal posts are in constant motion. ('The People' too, is ever in flux.)

It is perhaps also worth reminding ourselves of the obsevation made by Prof. Niall Ferguson that ‘The law of unintended consequences is the only real law of history’ and plebiscites, along with assorted other mechanisms for sudden, drastic historical changes of direction, are very much an open invitation to unintended consequences.

Brexit was presented as one of those issues that could be farmed out to ‘The People’ for a simple YES/NO answer, but if we have learned anything since 2016 it was that this was deeply misguided.

A second stab at this would suffer from many of the same fundamental flaws. I find myself, like many MPs perhaps, torn between what I would want to see happen now (viz that petition) and what is actually in the national interest.
In the Sunday Times today Gisela Stewart, former Chair of the Leave campaign, argues that it’s a myth that ‘the people’ made their decision in an uninformed manner.

For me, this particular issue is fairly irrelevant. Even if every one of the 17m+ who voted to leave had a comprehensive grasp of the options and issues behind that decision, can one really say anybody had a proper sense of their own and the nation’s stake in the matter? This has only - and could only - become manifest in the intervening period, and then in a not entirely transparent manner.


Posted by Inner Diablog at 5:50 pm No comments:

'You the public have had enough...I'm on your side'

Appealing directly to ‘the people’ (plebs) over the heads of their elected representatives might help her get around the current crisis, but it paves the way for further populist deteriorations in our democracy.

Looking 'Presidential' is increasingly not a very good look at all. 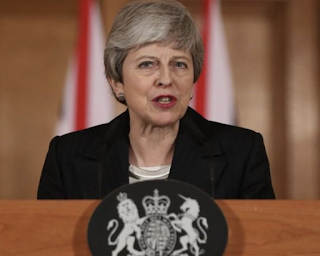 And I suppose from a purely selfish, ex-patty perspective, I have been rather enjoying all the 'arcane procedural rows', more than I know I would all the blather about knife crime and the stream of NHS pieties.

Not that these will get much of a look in when we leave the EU in a frenzy anyway.


Posted by Inner Diablog at 2:04 am No comments:

This movie stars two half-Guatemalans. So, that's like one whole Guatemalan! 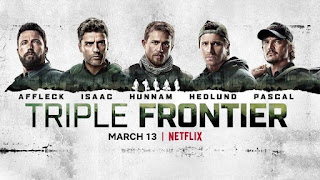 The title led me suspect that it was set in one of my favourite destinations in all of South America - the point where Perú, Colombia and Brazil meet on the Amazon river.

But no, it's actually located in a mashed-up, geographically-discombobulated version of that continent, much of it actually shot in Hawaii.

It has a fairly ludicrous premise which is part Ocean's 11 and part Sicario. As it progressed I had cause to recall other flicks like The Wild Geese and even Alive.

So, basically pretty silly, but quite entertaining.

As with Velvet Buzzsaw I ended up wondering how Netflix is able to sign up so many big name actors to this sort of dross.


Posted by Inner Diablog at 5:11 pm No comments:

Recent events up at the lake have reminded me of two works that sit at pivotal moments in the development of budget long-haul travel.

First there’s Alex Garland’s The Beach which presciently pinpoints the era when the molotera of young backpackers stopped being explorers and morphed into something more akin to colonists, or at least semi-resident populations with a damaging impact on local communities and the environment. The fate of the beach used in the 2000 movie version of the novel is further testament to this phenomenon.

Then there was a documentary I saw in the early 90s about a wealthy old German with a substantial lakeside property on Atitlán who was quite aggressively resisting the efforts of the inhabitants of a nearby indigenous village to construct their own road which would connect them to the main highway and thus to the rest of the world. The film exposed the multi-dimensional nature of developmental issues.

One wonders if those villagers now realise that they should have been more careful what they wished for.


Posted by Inner Diablog at 5:06 pm No comments:

Even the most committed, foaming at the mouth, no-deal Leaver surely has to admit now that the hardest form of Brexit that could ever get the nod from this Parliament is the arrangement negotiated by May’s government with the EU. So they’re all going to get behind it now, right?

Some may well flip next week, but the fact that others won’t tells us something important about the mentality of modern politicians.

Put yourself in their little heads and at least three pathways appear to remain...

1) Out is out. Take the deal on the table and leave sooner rather than later. See what can be done down the road to harden things up a bit.

2) Wallow in factional bloodymindedness. The DUP, the ERG and (at least part of) the Labour Party are demonstrating how ideology likes to shoulder barge reality.

Corbyn rather optimistically assumes that a failure to deliver Brexit will be taken by the country as a containably Tory debacle and that May’s personal disaster will become the springboard for his own ascendancy. Good luck with that.

Meanwhile, unconsciously at least, many euro-sceptic MPs will be aware of just how politically-irrelevant any sort of Brexit is likely to make them, while a full on ‘betrayal of the British people’ might grant them a salience in the medium term that they’d otherwise never achieve.

3) Find a way to get around the problem of ‘this’ Parliament and this particularly inept PM. The trouble with the latter is that Tory rebels called for a confidence vote way too soon and lost. However, they might still be able to get May to leave before the UK’s own leave process is finalised.

A general election remains the nuclear option likely to blow up in the face of both main parties.

Posted by Inner Diablog at 4:28 pm No comments:

Many years ago when I was an undergraduate, long before such things as Twitter mobs existed, the anthropology department at my university was teaching students that the human incest taboo was entirely a social construct.

Yet when I did so, even those young anthropologists, who otherwise appeared politically unengaged, reacted with cultish hostility - in much the same way their modern equivalents today responded online to the female academic who dared to suggest that any skeletons unearthed by archaeologists are either male or female and that a ‘trans’ set of bones would be pinpointed according to the original sex of the individual. 'Gender' being invisible to archaeologists.

Meanwhile over in my own department historians had only just stopped giving any credence to the notion that the Black Death killed almost nobody given that the massive social changes that occurred in the century after 1348 could not possibly have occurred as a result of a pathogen....because Marxism says so.

If history does present one clear and obvious lesson it is that dogma tends to poison almost everything. This is largely because it starts by being factually-selective and gradually becomes more and more hostile to evidence that won’t prop up its key tenets.

I’m not so sure about that incest taboo hooey, but a good deal of dogma undoubtedly starts with the best of intentions.

Many of those who were around at the start of French and Russian revolutions were moved by the spirit of what today we would call ‘social justice’. And of course many of these same people were soon not around at all.

The anti-semitism that festers beneath the hard-left’s position on the Israeli-Palestinian conflict is there because of the venomous influence of dogma. An individual has a personal, emotional response to reported events - empathy for the plight of the Palestinians - but that individual acknowledgment is soon subsumed within a collective dogmatic position. Uncomfortable truths that don’t add to the sense of righteousness are deemed conspiratorial, absurdities that do, are cherished.

It’s truly hard to hold a sensible discourse with someone in the grip of dogma, because they will always refer you back to the echo of the original individual impulse, rather than the calcified set of convictions that now drive them.


Posted by Inner Diablog at 4:05 pm No comments: