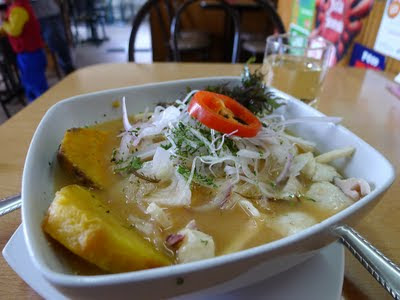 Peru, at once sufficiently similar and sufficiently different from Guatemala, such that I was never quite certain whether I was in my comfort zone or not, a state of affairs which quite often resulted in a truly disconcerting travel experience.

These points of intersection and deflection could be either heartwarming or disheartening.

I could list a number of seminal Peruvian experiences which are emblematic of this conundrum. Take the cebiche for example, just like a ceviche, but tomatoes are out and sweet potatoes are in.

Tocumen International Airport in Panama, aka 'the hub of the Americas', plays host to some five million passengers every year, two million of whom pass through in transit. It may not be as swanky as Guatemala's Aurora, but it's certainly better connected, linking major cities in ten different Latin American countries and with its rather messy blending of arrival and departure spaces, one always seems to be caught in the middle of a frantic steeplechase, as passengers hurry from one end of the terminal to the other in order to make their rather tight connections.

The major carrier operating from here is Panama's Copa, part of the United-Continental group, and as a consequence Tocumen bears a passing aesthetic resemblance to George Bush Intercontinental in Houston, though without the pervasive smell of popcorn.

One of the first things I spotted after disembarking the flight from Guatemala was a man wearing a Panama hat. I doubt whether it was purchased inside the airport however, because Tocumen, unlike its equivalents in Guatemala and El Salvador, appears to lack one of those emporia of local souvenirs selling all kinds of Panama-badged nic nacs. Though if all you want to remember Panama by is a bottle of Ron Abuelo Añejo, you should be fine... 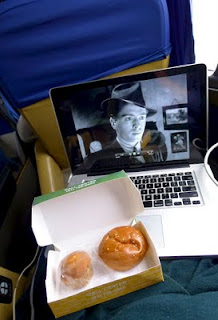 Having just finished Greene's gripping 1938 novel, I managed to watch both movie adaptations on the overnight bus up here from Lima.

Each was (obviously) made after the Second World War, which makes them, for me at least, inherently a little less interesting than later interpretations. For Brighton Rock is one of those works which, almost certainly unknowingly, delivers a snapshot of a world on the edge of the abyss. It's final words seem almost prophetic in this context, as it leaves Rose wandering off towards 'the greatest horror of all'.

My grandfather was a cine enthusiast and shot a number of otherwise trivial home movies (in colour) during a family holiday in the South of France in the same year Brighton Rock was published. I have them on a VHS conversion and naturally there is now something poignant about watching people enjoying simple pleasures in a place that would soon be off-limits to pleasure-seekers.

There's a rather droll textual forward to the 1947 film which reassures viewers that the violent Brighton underworld and the slums that acted as its incubator no longer exist. (Did the Germans bomb them to oblivion?) Meanwhile Joffe has controversially shifted the chronology of his update forwards into the 60s when social order was crumbling once again, this time as rival youth subcultures asserted their ascendency and the right to duff each other up. It's an interesting gambit, and one which forces Joffe to ditch some of the key plot set-ups from the novel, such as Fred Hale's alter ego Kolley Kibber and the newspaper treasure hunt.

The 23-year-old Dickie Attenborough is quite remarkable as the teen sociopath Pinkie in the Boulting brothers' film. It makes you wonder a bit about the ingratiating lovie he appears to have become in his dotage. The essence of this character is surely his repressed inner life, which manifests itself as an over-expressive tendency in the arena of opportunistic violence. Hard as it is to do more than suggest this turmoil on screen, Attenborough's personification seems to glow with this deadly juxtaposition of cockiness and elemental fear.

Sam Riley's Pinkie is less remarkable, rather more like a junior incarnation of paranoid gangster types we have grown accustomed to on our screens. (Note that the 1947 film reached American cinemas as Young Scarface!) The script does however give a bit more support by implication to the notion that there was something not quite right about Pinkie's relationship with the deceased leader Kite. And we do get the impression that this Pinkie is not quite sure where he falls on the line dividing sympathy and antipathy for the poor waitress, whereas Attenborough gave us very few hints of warmth to work with.

It's a rather one-note performance, but the same cannot be said of his foil here, Andrea Riseborough's Rose, as complex and nuanced as the late Carol Marsh's version was a straightforward portrait of wide-eyed innocence. (Marsh reminded me a bit of rising British starlet Carey Mulligan. A bit too pretty for the role really.)

Anyway, I didn't mind the reduced emphasis on Pinkie's sordid internal dialogue, in part because it's one part of the novel that stretched credibility for me. Greene always tests my tolerance for thickly laid-on Catholic guilt

The character which wasn't pitched right in either film, but certainly not in the 2010 remake is that of Ida Arnold. Hermione Baddeley had her as a kind of salt-of-the-earth proletarian archetype, whereas Helen Mirren plays her as a bit of a cold fish, which is oh so wrong from the point of view of Greene's take on the underlying theological message. Arnold is an ageing bad girl, not far enough past her sell-by date to stop posing a threat to other people's marriages. In the context of this story

For Ida's quest to be meaningful Fred Hale's end needs to be something we regret. It doesn't help Joffe's film at all that he has cast the bloke who plays the assassin in The Borgias as Hale and tossed aside all Greene's ambiguity about the journalist's role in the demise of Kite. Indeed, here Hale is just another gangland thug. Boulting in contrast, insisted that Hale's mistake was to write too candid an article about slot machines and Kite's intrusion into this business.

Perhaps to take our mind off his substantial alterations (Ida is now the manager of Snow's and Corkery not just her would-be lover but also the bookie that gets 'carved' by Pinkie and Dallow, while dodgy solicitor has been expunged completely) it would seem that Joffe decided to put back into his narrative all the things that Greene and Rattigan left out of their own screenplay in 1947. (Back, to good effect is the bottle of vitriol and the cliff-side denouement and less effectively perhaps, Rose's father.)

Interestingly Joffe's screenplay imitates the twist from the last scene of Boulting's film. I have to say, I do wonder whether it was Graham Greene or Terence Rattigan who thought that one up. In a sense it makes for a 'better' ending than the novel provided, but from the perspective of the author's scathing examination his faith it's a bit of a cop out, zooming in on a crucifix which, we are given to conclude, symbolises a universe where the wellbeing of the innocent is taken into consideration. Whatever happened to 'the greatest horror of all'? Unfilmable, one presumes.

PS: Having just finished tracking through the debate about the 'highest' genre in art in Public Enemies I think it worth noting that Boulting's movie (as Joffe's surely will one day quite soon) feels dated in a way that the novel itself simply doesn't.

Speaking of genres, the 1947 film clearly fits within the noir tradition. In contrast last year's rehash shows its awareness of the Hitchcockian tradition that was then still a decade away.

Posted by Inner Diablog at 8:04 pm No comments:

Well, the Septics have got to be thankful that there's hardly anywhere else in the developed world that looks a safer bet for stashing large amounts of loot at low risk right now.
Still, the fact that there was in the end considerable bi-partisan support in both houses for welcoming catastrophe with wide-open arms, means that nobody outside the US will have watched this artificial crisis without drawing some obvious conclusions about that nation's long-term reliability as a safe haven, let alone as the de-facto leader-by-example of the global economic system.
Whether or not the ratings agencies have the cojones to do anything about it is another matter. The long-term issue of national indebtedness won't go away until the Bush tax cuts are reversed out and a very serious look is taken at other entitlements paid for at the Federal level. Let's not mention all the overseas empire not-building.
Obama got caught out. He did nothing when he controlled Congress and before it filled up with delusional loons from the Tea Party. Their cultist approach to the constitution is perhaps little more than sublimated racism, but in times of worldwide insecurity it's really not ideal to have that many apocalyptically-inclined politicians in a position to make (or break) the key practical decisions facing humanity right now.
They know the President is by nature inclined to doing deals and doesn't quite know how to handle people who will go all the way for their belief in the counter-factual.
Should he get a second term, Obama has to hope that the American electorate will have figured out the difference between fact and opinion and will have extirpated these extremists from their bridgehead in Washington.
Posted by Inner Diablog at 9:14 pm 2 comments:

And here we have the lady who started it all, Mexican concert pianist Consuelo "Chela" Velazquez, elaborating on the simple lovestruck teen ballad she had composed some three decades earlier.
Posted by Inner Diablog at 6:44 pm No comments:

Takes a while to get going, but worth the wait as it features Stevie Wonder on the harmonica.