Freestyle at the Moskva

One of the most striking attractions on my Moscow visit in 1984 was the Moskva open-air swimming pool.
I say striking rather than memorable, because it is also striking how over the years I have tended to remember it rather less than other items on the itinerary, which might have something to do with the fact that I have no personal photographic record of this dip. 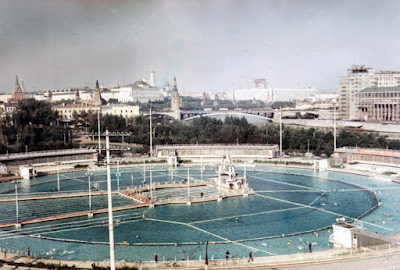 The pool was first opened in 1958 having been constructed on the foundations of Stalin's proposed Palace of the Soviets, a grand, totalitarian architectural wank that was to have replaced the demolished Cathedral of Christ the Saviour within sight of the Kremlin walls.
But after the war Stalin's affection for the project waned, so instead, a few years after his death, we got this giant all-year circular swimming pool, its liquid shape 130m in diameter, able to service up to 20,000 swimmers a day in ambient temperatures as low as -20 degrees centigrade. 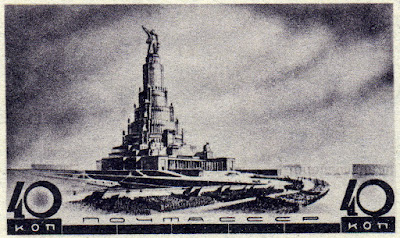 Epic failed erection...
One entered, in effect, from below, having been provided with a regulation rubber cap.
The water was as warm as an indulgent bath, and one could never fully appreciate the full 13,000 square metres* of its area, nor indeed its current level of occupancy, as one found oneself wrapped in a mysterious, somewhat sweltering local mist. It's probably for that reason that the Moskva pool appeared on the silver screen as a meeting place for spies. 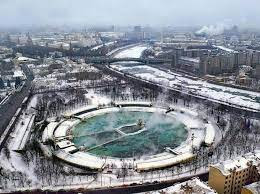 It's gone, and the cathedral is back. Full circle one might say, but this isn't so much a circle as a labyrinth. I think if I were a young historian at Cambridge today, my attention would be lurching towards the interplay of imperialism, nationalism, Bolshevism and Orthodox Christianity in Russia. Un chirmol, as we say around here.
There are all kinds of interesting approaches available for classifying the Russian invasion of Ukraine. One of the most interesting was covered in the Economist this week — as a death match between top-down and bottom-up ways of being.
Or between a vast territory that has never successfully made the transition to modern nation state and a portion of its former imperial realm that has dared to succeed at the very thing Russia has consistently failed at.
Perspectives that tend to credit Ukraine's self-organisation clash with those that see the war entirely as a result of western meddling. It is not unusual however for American academics to reflexively deny agency to the world outside.
There has been much talk about Ukraine's 'drift' westwards, something historians might remind us has been a constant feature of its history for around a millennium. Putin, we are told, has been provoked into his 'inevitable' Z war by the possibility that Russia's neighbour could definitively detach itself from its sphere of influence by joining NATO and/or the EU.
Much less has been made of Ukraine's decision to break away from the authority of the Russian Orthodox Church, a mini-schism that was instigated three years ago. (By the way, the corollary of the phenomenon of Americans blaming themselves for everything is that the Kremlin also blames them for everything, including this awkward ecclesiastical divorce.)
In Putin's mind, addled by the notion that the Russian Orthodox Church is the last pure version of Christianity, untainted by all those western liberal heresies, this could well have been the most significant incitement to invasion.
And the language used in support of the war by senior members of the Orthodox hierarchy in Moscow has started to resemble that deployed by western clergy prior to and during the slaughter that was the Albigensian Crusade in the Languedoc. Crusaders have perhaps never been so bloodthirsty than at the times when the focus of their Holy Wars has been on their fellow Christians.
So while it remains useful to explore the parallels between 'Z' and other, relatively recent modern conflicts, its resemblance to the sanguinary religious wars of the medieval and early modern periods in Europe should also be noteworthy.
One might add that the popular and political culture of Central and Eastern Europe has always been above-averagely informed by atavistic attitudes and hodegepodgey folk memories fed by cris-crossy ancient, medieval and modern currents.
Yet we in the West have every reason to pay careful attention to the way the battle lines are forming. That Economist piece on Ukraine's decentralised governance reminded me of something in my own nation's murky folk memory: the Anglo-Saxon shire fyrds and the Witan.
I would suggest that we do more than pay lip-service to standing up for Ukraine's freedom, for this is a form of freedom that could potentially reinvigorate many parts of our own political societies, which makes its preservation perhaps even more urgent.
The USA in particular could look at the way that 'Cossack' libertarianism combines rugged, individualist freedom with collective responsibility.
* On my return from the USSR I wrote an essay which addressed the apparent Soviet obsession with quantifying everything.
Posted by Inner Diablog at 5:51 pm