A de-othering of the present...

There are people who have nurtured a fundamentally humanitarian sensibility in themselves. They tend to see all human conflict from the bottom up, in terms of its impact on the lives of innocents and relative innocents. This leads either to active engagement with the suffering or to comparative detachment, at least from the political issues behind the violence.

I am not one of these people, but I respect the tendency. As a child my instincts were basically pacificist. This began to change around the time of the Falklands War, now 'celebrating' its fortieth anniversary, which brought some clarity to my adolescent mind about the need to stand up against an aggressor who purposefully interrupts the civil existence of a defenceless community for largely depraved reasons.

Against the hardened positions of many of my parents' generation (and indeed, one actual parent), I continued to plead for the humanity of the civilian victims of Hiroshima and Dresden even though the worldview of their leaders was utterly antithetical to my own — and this is more or less how I feel today about other fellow humans suffering as a consequence of relentless bloodshed that has consumed their lives. (e.g the Palestinians).

Historians are required to make choices early on about which parts of the collective struggle interest them on an intellectual level, but also on an emotional level. These decisions are subjective, but also grounded in values that matter to us.

This is in effect rather like a process of triage with the totality of human concerns — we give up on being equally engaged across the board, and in a sense we also give up on prioritising the present over the past.

And so, I have been on the end of some trolling in the past for apparently failing to intuit the importance of some active conflicts in the world to my own existence.

This extends beyond the Israeli-Palestinian conflict to wider ideologically-driven hatreds in the same region, as I have always contended that there exists a panoply of interests that combine to exaggerate the existential nature of Middle Eastern strife for the rest of us, which in turn has the effect of fostering pernicious enmities within our own societies which might not otherwise have flourished. There is a bizarre blend of cynicism and naivety behind this.

My instinct at least is to condemn outright the dabbling of western politicians and other organisations with the leaders of non-western societies whose outlook on shared life I find abhorrent, before proceeding to recognise whatever mitigating circumstances might exist. (Yes, I will watch the Mundial in Qatar.)

Right now, Russia's Z-war is grounded in attempt to blatantly "other" Ukraine, its long-term cultural and political neighbour, which is likely to lead to the fullest distillation of a vicious credo which actively dehumanises all attempts to maintain working nation states based on pluralistic values. (That's us.)

It has in effect removed all the barriers of otherness I may at one time have felt about Ukraine and its people. In Volodymyr Zelensky, I encounter a brave man who is standing up for things that really matter to me. I believe his outlook is shared by many, if not a majority of his compatriots and, as I mentioned in the previous post, they undoubtedly appear to possess greater clarity about the threat being presented to their own lives as well as the values underpinning them. 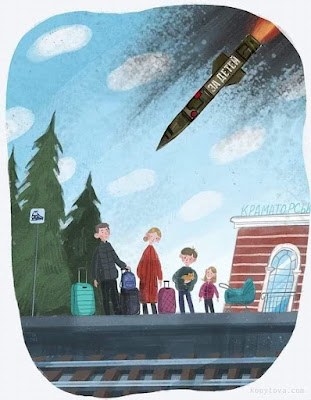 And they are enduring a negative-humanitarian onslaught the likes of which have not been experienced in 'the West' since the mid part of the last century. This is not simply a matter of the quantity of human rights violations, but the quality of them, and what this means for our civilisation as a whole at this precise moment in its history.

Posted by Inner Diablog at 7:32 pm