Until a couple of years ago I imagined that the most significant patch of history that I had lived through was the UK pop cultural 'scene' of the early 80s*.

But History is back, and with a bang. And it is moving so fast that finding oneself on the wrong side of it is an increasingly obvious mantrap that whole masses of commentators and political actors are clumsily pitching themselves into.** 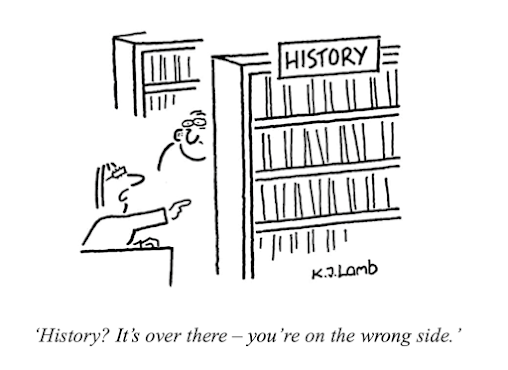 It's unclear whether the Russians have yet dabbled in genocide in Ukraine, but Bucha is unlikely to be an isolated incident and the path is undoubtedly being prepared. An op-ed from news agency RIA Novosti today lays down the rhetorical case for the atrocity.

"The name Ukraine can seemingly not be retained as the title of any fully denazified state formation on the territory liberated from the Nazi regime...Denazification is inevitably also deukrainisation – a rejection of the large-scale artificial inflation of the ethnic element of self-identification of the population of the territories of the historical Malorossiya and Novorossiya begun by the Soviet authorities.

"The Banderite elite must be liquidated, its reeducation is impossible. The social 'swamp' which actively and passively supports it must undergo the hardships of war and digest the experience as a historical lesson and atonement...

"Denazification is a set of measures aimed at the nazified mass of the population, which technically cannot be subjected to direct punishment as war criminals...However, besides the elite, a significant part of the masses of the people, who are passive nazis, are accomplices to Nazism. They have supported the Nazi authorities and indulged them...

"The just punishment for this part of the population is possible only as the bearing of the inevitable hardships of a just war against the Nazi system."

All talk of endgames and off-ramps has been made redundant in the past few days. Those who would continue to deal with Russia — economically and politically — are teetering on the edge of the aforementioned mantrap of wrong-sidedness.

How horrid in thought and action does Russia have to become before Germany bites the bullet and stops sending the Kremlin billions for its oil and gas?

Zelensky's speech last night took aim at his 'allies', Germany and France in particular. They were the ones who blocked Ukraine's participation in NATO way back in 2008, at a time before it would become truly problematic as a result of an open conflict with Russia post-2014.

In spite of all the talk of NATO unity in the face of this invasion, it is clear that there are some Chinese walls within the alliance and that the "anglo-saxons" are operating a combined Intel and support strategy, leaving major EU players largely outside the room. (This may in part explain why many of them appeared to act out this approach in reverse and in person with Boris Johnson when he showed up for the recent NATO gathering.)

What exactly has Macron's contribution been other than to dial up Putin once a week to see if he has recovered his humanity?

Britain has not only been supplying Ukraine with more military kit, it is obviously more useful kit, at least as far as the current strategy on the ground goes. And now Boris is said to be about to ask Parliament if he can send over some anti-ship missiles to Odessa.

If that city were to fall, most likely to some sort of combined land assault and amphibious landing, Russia would control Ukraine's access to the Black Sea and possess a long corridor across the south of the country allowing it to directly threaten NATO's soft underbelly in the Balkans. Holding such a port would dramatically reduce its logistical worries for any future thrust westwards.

Anti-ship missiles make perfect sense, as does Britain (alone) supplying them to Ukraine.

From the outset Putin has made not-so-implicit threats about retaliation against outside interference. These threats by the Kremlin and its media mouthpieces have tended to become more geographically-specific, mentioning the EU states closest to Ukraine and Belarus by name.

A UK apparently acting independently, in the political and diplomatic spheres, turns out to be a phenomenon of some geopolitical significance. I remain no great fan of Brexit, yet this novel scope for unilateral policy is something that the Russians may struggle to cope with relative to NATO or EU mixed block responses just beyond his borders.

Westminster is in a relatively privileged position now of being able to push the envelope of lethal aid, in part assisted by the fact that the Russians have as yet not been more specific about their red lines.

Having the North Sea fields, the UK is far less susceptible to Russian energy blackmail and as an independent nuclear power with a submarine fleet no doubt already lying quietly on relevant sea-beds around Russia it is far less easy to intimidate with atomic grandstanding. Any nuclear exchange between the countries would of course be catastrophic for both, but would surely not serve Putin's underlying nihilistic goal of wrecking the West as a whole. And Russia would be gone.

Putin is in a position where he has to address the UK's contribution to Zelensky's arsenal as a (slightly) separate problem and he can no longer rely on Boris having to tow the block line.

With China remaining a standoffish kind of pal, Putin must also be fretting about Australia, way over there, perhaps beyond his peripheral vision. The AUKUS nations are collectively harder for him to get at now, yet clearly engaged in active collaboration in undermining his absurd denazification project in Europe.

* If there was a period of lived history I'd like to revisit the early 80s would be my first choice, but the period a decade earlier also remains lastingly fascinating to me, though more limited to the very specific local geography of my childhood: King's Road, Chelsea.

** Tucker Carlson is down there, the pointed wooden stakes poking through his chest, weakly calling out 'come on down' to those above on the ridge.

Posted by Inner Diablog at 4:38 pm