When the Depp vs Heard trial kicked off a couple of weeks ago, I have to admit I had formed only the barest outline of an opinion.

It was however very quickly echoed by the testimony of one of the expert witnesses — couples therapist Dr Laurel Anderson — who suggested that there had been mutual abuse within a relationship that had turned toxic absurdly fast. "Can everyone just go home now?", I wondered at the time.

Aside from this prior impression I was carrying one other small but significant bias. I was aware that Johnny Depp had lost his UK action against The Sun (a trial I had not followed at all) and had notched up the fact that he had chosen to use the libel laws of my country in a punitive exercise against the free expression of a British newspaper on the debit side of the Depp ledger.

I had also concluded that much of the reputation damage the actor had suffered had probably occurred as a result of the mis-step of pursuing this suit abroad against a third party.

Now, in the past I have said a few disparaging things here and elsewhere about Guatemalan lawyers, but when it comes to Amber Heard's legal team..what the actual fuck?

If, by the time the actress takes to the stand the case has to a large extent got away from her, a significant part of the blame will lie with the men and women she has entrusted to cross-examine her ex-husband and his witnesses, many of whom have run circles around them. (Even a group of LAPD cops have out-sparred them.)

There's the one who asks the same question over and over again, usually in an increasingly, and obviously leading fashion. The one that objects to his own questions. The one that cannot apparently distinguish between a witness's direct personal experience and "hearsay". And the one who held up a cosmetic product as evidence in court that had not been on the market at the time of the pair's marriage. (I've had to deal with something similar recently.)

Given that Team Johnny had been put into bat first, at the very least Amber's fielders should have brainstormed a way to carry through a modicum of basic sympathy with both the jury and the "court of public opinion" outside, and not themselves become figures of ridicule and public antipathy.

It is not always important to retain a lawyer that reflects well on one's person and one's case, but there are situations such as this (see also Trump and Giuliani) where it can be crucial. And rhetorical adeptness has few authentic substitutes.

In the early days of our company we retained a barrister based in Bedford Row, Bloomsbury, recommended, and with good reason, by my partner as an individual with an extraordinary processor in his head. (This being the 90s, the word Pentium cropped up.)

He was indeed endowed with an impressively sharp mind, but the reason I have long upheld him as a paragon of lawyerly qualities is that he combined this incisiveness with an ability to argue on the fly both lucidly and logically. And all this with a captivating personal charm.

In the following decade, after the sale of our company, we suffered an extended exposure to altogether sharkier American lawyers, with their far more adversarial approach to any negotiation — in this instance not the advocates representing the company that had bought us, but the ones retained by the firm that had subsequently acquired them before we had been fully masticated and digested.

The blustery approach of lawyers on this side of the Atlantic has often struck me as a smokescreen hiding an inability to handle the more sophisticated aspects of the debating techniques that I grew up with.

One lawyer in the Depp v Heard trial, I forget which side he is on, keeps interrupting himself with "strike that" in a manner that duly strikes me as particularly inept.

I'm going to reserve my opinion as to which way the verdict is ultimately likely to go, but at present I would have to admit that if Amber were to consult her team on how it's all going, she'd probably get a similar response from her stooges as Vlad here... 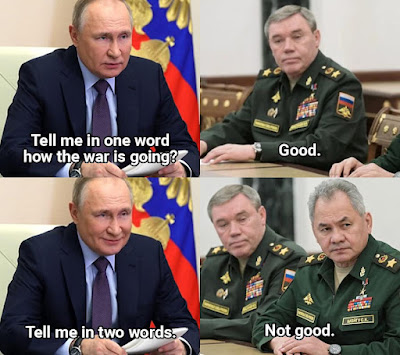 One needs to discern through the utter disorder of this failed relationship the always very significant matter of motive.

If Johnny struck out at his wife, it was most likely a result of a state of "temporary insanity" brought on by alcohol or substance abuse. Crucially this does seem to be explanation proposed by Amber's lawyers in the face of much testimony suggesting that Depp is not an inherently abusive person in his now rarer default state.

Yet if Amber struck out at Johnny, there could well have been something more premeditated and systematic going on, something more akin to deliberate bullying. Was she "triggered" or was she firing on automatic?

This is an important nuance for the jury to tackle, so it surely does not help in a case all about disorderly, possibly innate aggression, when this is apparently one of the characteristics of the individuals taking on the witnesses.

I have also acquired a better understanding this month of the legal and financial arrangements surrounding the split. I had not previously been aware that both sides signed a non-disparagement clause which should have made Amber think twice before submitting that op-ed.

Her financial demands after a mere 15 months of marriage had been somewhat extreme given Depp's pecuniary situation at the time and it would not be hard to now characterise her approach as vampirical — sucking him dry and then, in effect, preventing him from ever again approaching a blood bank.

Anyway, vaguely apropos of all the above, a pic here of Depp that I took in London ten years ago, just as his relationship with Heard was breaking into the public consciousness and not long before he had a crow tattooed on the back of his right hand... 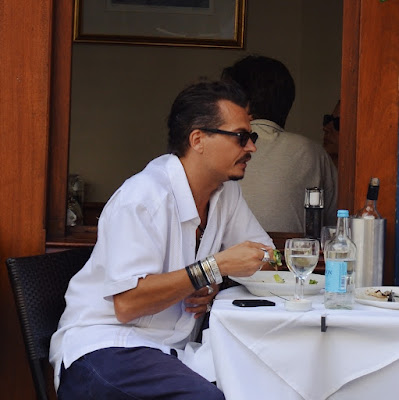 Posted by Inner Diablog at 1:31 am