My wife was a Guatemalan national champion in fencing (foil).

Some time after our first encounter we discovered that this was something we have in common: the fencing part, not the being particularly good at it part.

She’s still feeling quite chuffed having heard someone she’s known for a very long time expressing the view over the festive period that she was a true pioneer of women’s sport in Guatemala.

This is certainly true yet she hadn’t quite thought about it in this way before and perhaps imagined that he and everyone else might have forgotten. Her own experience of being a pionera en esgrima was actually one of pointed difficulty.

Here at ExCel during London 2012 the most extraordinary thing we noticed about the fencing competition, aside from the razzmattazz presentation, was the unhooked, wifi nature of the swordplay. Back when we were assuming the en-garde position, each serious bout that followed tended to feel a bit like horizontal bungee jumping. 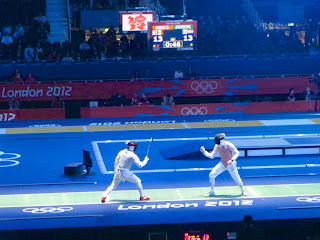 I had fenced at school level: mainly foil but I had dabbled in sabre too. I enjoyed the sport and took advantage of its relative prestige at St Paul’s, which boasted some of the best coaches and what was then at least, said to be the largest salle in Europe.

Yet I never pierced the bubble of mediocrity. At the time I put this down to an innate lack of athleticism, hand-eye coordination and so on, but having later reached a pretty decent level at sports like tennis the truth, rather depressingly, probably had more to do with character and motivation.

Not winning didn’t bother me all that much. And I never quite separated myself from the crowd of swordsmen who were only there in order not to be running around a rugby pitch in the freezing Thameside fogs of November.

Yet in adult life I have discovered that I can generally be good at anything I am truly determined to be good at.

Such determination needs to be consistent. As an investor for example, dips in attention or enthusiasm can be like micro-sleeps on the motorway: very expensive.

After university I went on to become a pioneer of sorts in the field of digital communication and investigation. My wife had before then moved on to another pioneering career, this time working for La Antigua’s very first firm offering computing-services. (She finds it rather amusing that probably the most well-known remaining operator in this field here today is run by the son of the city’s most recalcitrant former Luddite.)

It was an era when Antigua seemed full of motivated foreign and local entrepreneurs who had a vision for developing the economy that has become more than a bit diluted.

Nowadays the closest many young chapines get to participating in the information economy is when they throw open the doors of their own coffee shop.

And the city now seems to act mainly as a lure to the kind of ex-pat investor who opens a restaurant because they don’t know how to do anything else, at least not anything that would allow them to keep their heads above the water.

The whole NGO scam was far less well developed back in the day as well.

Posted by Inner Diablog at 9:45 pm

Hi everyone, I am Mark Milley and I am so happy to return to this great forum to testify to the help I received from Williams David. I was in desperate need of a loan in another to be free of debt and financial slavery that had been entrusted to me by my ex-wife. It was really bad that I have to ask for help from friends, family and even my bank, but on one of them it could help me because my credit score was really bad. So I was browsing on my computer and saw some testimonials from people that David William helped with a loan, then I decided to contact him on his email {Personalloanesay@gmail.com}, so I got an email from them and I did everything He asked me. To my surprise, they transferred the loan I requested to my account and now I am so happy to cancel my debt and I have also started a business with the remaining amount to take care of me and my family. If you need a loan, contact the best loan lender of all time David Williams in his email: {Personalloanesay@gmail.com}