Drowning in a glass of water 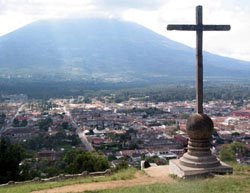 An abuse of local hospitality? An affront to the religious fervour of a nation proudly "conservador y creyente"? A sign of impending moral apocalypse?

Whichever it might be, the ferocious-looking ceremonial garb of victimhood has been donned and urgent protests have been directed at local authorities. There has even been talk of a demonstration outside the residence of the most senior prelate in town.

Some have expressed the fear that this World Heritage site will become a 'mecca' for gay tourism, and that drugs, paedophilia, prostitution and all the other denominations of depravidad will not be far behind. Guatemalans suffer from near-Jamaican levels of homophobia at the best of times and it can be hard for openly gay foreigners to find accommodation with local families when they come here to study Spanish. Yet it is also the case that there has been something of a well-settled, sandals-off gay scene in Antigua for many years. Gore Vidal lived in the city from 1947 to 1949 and had little trouble developing opportunities for anonymous same sex encounters. (I came across one amusing aside from a local bloguero who tentatively reported that "a taxi-driver once told me that Wednesday night is gay night in Antigua.")

Few of the most passionately piqued appear to be residents of Antigua. Many are nostalgic long-term exiles in the US, and for nearby capitalinos Antigua presents itself as a adventure park of old world ways for taking the kids on Sunday afternoon.

It's not exactly clear what most disturbs the Guatemalans about this piece of news. It's as if an apparent act of disrespect towards one of the few things of global cultural value in their country has started all those partially-healed wounds of national indignation bleeding all over again. (Yet can we be so sure that even the Germans wouldn't bat an eyelid if someone made an S&M flick in Beethoven's old house in Bonn?)

Stepping oustide the circle of stone-throwers, you would have to conclude that the root cause of this sudden flare up of chapin complejos is some rather irresponsible reporting. No actual homosexual coupling was ever filmed in the aforementioned sites; that all took place in the Granai mansion at the entrance to the city. The camera crew later filmed actors wandering around the ruins like any other tourists. It seems that only bloggers are both able and willing to admit to having actually viewed the material in question.

Anyway, the key issues that have engaged the minds of local bloggers and their comentaristas this week are:

Posted by Inner Diablog at 4:53 pm