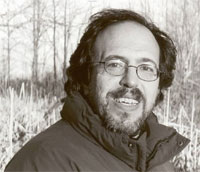 Watched an interview with Lee Smolin on Redes yesterday (it being Spain they had him cornered in a cloister) into which he tossed a musical analogy for distinguishing the fundamental outlooks of classical and modern, relativistic cosmology: whereas in the classical form musical time is delimited by the fixed, external tic toc of the metronome, in many contemporary musical styles, time is instead defined by the interactions of the individual musicians.

A weaker version of the same symmetry exists in the media. For the past decade the digital new media has largely been a more distributed version of the classical 'old' media. Meanings were still being fixed on the outside then injected via websites acting as channels into a network that wasn't yet functioning properly as a network − because its underlying organisational logic remained largely digital and serial. (Hence perhaps Ted's persistent proclamations over the period that the time has come to liberate the Web from the techies .)

Within the networks of social, user-generated media however, meanings more often emerge as a result of interactions between the nodes and there is certainly no straightforward, one-way tracking of a external media and communications metronome.
Posted by Inner Diablog at 9:42 am