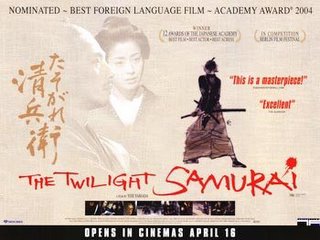 This is more or less what would have happened if Chekhov had been asked to come up with the plot for The Last Samurai.

Hiroyuki Sanada also appeared in that overblown Cruise vehicle, but here plays badly-groomed zen disciple Seibei Iguchi, aka "Twilight", a nickname bestowed on the widowed Samurai for his habit of heading straight home to his two young daughters at the end of the day, instead of going out drinking with bar girls like his workmates (one indicator of the modern relevance of its themes).

Gentle comedy and romance alleviate the pervasive mood of melancholy in a narrative built to serve the central character study − that of a man whose modesty of means keep him forever on the edge of dishonour and destitution, yet whose modesty of spirit belies an heroic attempt to live the fullest of lives whilst not actually trying to move up in this world. The backdrop to this personal struggle is a political convulsion that is shunting the old clans into obsolescence while the bodies of starved peasants float slowly past the fishermen on the riverbanks.

Not quite a masterpiece, but a gem to compare with Ame Agaru (After the Rain).
Posted by Inner Diablog at 9:59 am