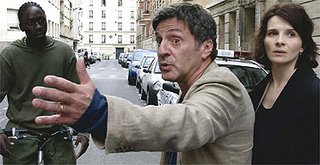 A disquieting, atmospheric and soundtrack-free French thriller that appears to have been conceived with the idea of avoiding an American re-make in mind.

Austrian writer-director Michael Haneke has set about this by dousing this story of hidden guilt in multiple layers of ambiguity. In an interview on the DVD he rather smugly observes that his film will possibly not please people that like to forget what they've seen when they leave the cinema.

Overall, I'd say that Caché is just a bit too pleased with its openness. I would have liked the nature of Georges' secret to have been a tad more vile and clearcut, or alternatively, yet more ambiguous. Still, a very fine film, and Binoche and Auteuil are at their best. I'm looking forward to seeing the enduringly alluring Binoche in Haneke's first French language film Code Unknown.

Hollywood will have no use for the viewer-decides ending, or for the social satire and dark political understory, but some shameless stateside scriptwriter might find a way to re-work the conceit of the mysterious surveillance videos into a more mainstream thriller.

Haneke is also a master of letting the audience watch time pass - pauses that aren't really pauses, but dramatically-significant gaps in the dialogue that few other directors could carry off to such great effect.

Roger Ebert's review highlights another problem facing would-be Americanisers: "Yes, in France they have shows where intellectuals argue about books, and an audience that actually watches them."
Posted by Inner Diablog at 9:52 am