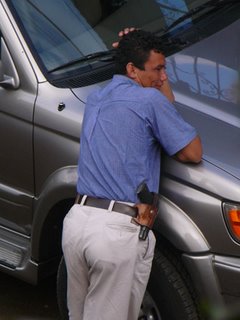 Personal firearms are routinely carried quite openly in Guatemala, as this pic taken from our bedroom window attests.

When I first went to Central America in the late 80s my parents appeared convinced that I would be riddled with bullets before making it through Customs. Yet although I was probably exposed to far more danger than I realised at the time in El Salvador, Guatemala itself was comparatively safe for transients back then.

These days you have to be alert to people 'packing under the influence', especially on weekend nights. On our first Saturday we were about to board an Orellana bus home, when on a whim we decided to let it pass so we could try out a shuco from La Perrada ( as recommended by Blog de mi Guatemala.)

The next bus was one of the more chickenish kind that terminates in San Antonio. As we got down at our corner we spotted the now stricken Orellana a little further up the road behind a police cordon. All around the grassy verges were filling up with noveleros and the first verbal reports were being passed from neighbour to neighbour: a shoot-out; two dead.

Forensics from the Ministerio Público was already at the scene taking photographs on the bus. From the rear hatch, blood was seeping down onto the tarmac which had been illuminated by a powerful lamp the MP team had brought with them. After a while the Bomberos clambered up using the red and sticky metal step at the back and brought down the two corpses. They were laid out face upwards, oddly depressed below the diaphram. Both were wearing dirty non-descript jeans and t-shirts. "Mecánicos" someone explained. One had been shot six times. The hair of the other had a dense coating of dark, syrupy blood.

At the edges of this theatrically-lit crime scene a crowd was gathering, including mothers carrying curious youngsters. The star of the show, la Fiscal, strutted around the stage in high heels, waving her clipboard and directing her subordinates to cut away the clothes of the deceased and take their fingerprints. On their exposed ribcages and around the road where other bits of evidence were deposited they also positioned little plastic yellow signs: "A", "B" etc.

Were these young men victims or perpetrators? We never found out for sure. A few days later we heard it said that both had indulged in some binge-drinking at a fiesta in Alotenango and that the man that had started shooting was himself one of the two muertos stretched out on the road. If we had boarded that bus we would almost certainly have had to squeeze down the aisle to find a seat right at the back where the firefight broke out.

The MP team gathered to compare notes then departed in a marked SUV. The bomberos then tipped the corpses onto stretchers and loaded them onto their open-backed 'ambulance'. The fireman holding onto the rear of this vehicle between the feet of the two stiffs had time to pass a joke with one of the onlookers before they drove off back to Antigua.

A day later it was reported that a female Fiscal of the MP had been killed after driving into the back of a large trailer. Was it the same one? Had she also been subjected to the same ignoble post-mortal humiliation by her living colleagues, laid out and stripped, tagged and carted off, painted toes sticking out the back of a pick-up?

Another gun-toter of note in our area is an affable Man from del Monte type on an old bicycle who follows a single horse and rider around the neighbourhood several mornings of each week. An equestrian trainer with fair skin and a neat little grey moustache, he wears a square-cut Panama and a pair of calf-length patterned leather cowboy boots, the right one unzipped half-way to reveal the butt of a sizeable automatic handgun. He also sports one of those patrician smiles that succinctly communicates the message to any vagrant low-lifes: "Muy buenos dias, come any closer baboso and I'll empty my pistol into your thorax."
Posted by Inner Diablog at 3:42 pm