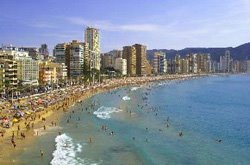 Known today as Benidorm and reached via the airport at Alicante, one time Al-Akant. Reminders of Western Europe's only Islamic civilisation, Al Andalus.

The society that replaced it was one that would not have appeared so far off from the ideal to the likes of Osama Bin Laden. It did after all give us the Inquisition, and five hundred years later Franco-era Spanish school textbooks contained gems like this:

"A wife has no rights over her own body. On marriage she gives up those rights to her husband. He is the only one who can use those rights and only for reproduction" and "stimulants like coffee, tobacco, alcohol, newspapers, politics, cinema and luxury undermine us and waste our bodies away."

Faith-based fascism has assumed many forms throughout history, something we forget when we focus on Islamist variant that today seems to pose such a serious threat to liberal lifestyles. Still recoiling from the unprecedented bloodlettings resulting from the clash of secular ideologies in the twentieth century, modern westerners are also prone to disregard the fact that sacred communities in general have − over time − committed a greater overall number of senseless murders in the name of their one God.

Yet if, like me, you are inclined to think that the belief in divinely-inspired scripture is essentially wrongheaded, Islam is undoubtedly the most wrongheaded of all the montheistic systems, essentially because it represented a conscious upgrading of the previous two. There's a significant totalitarian streak in Christianity too, but perhaps it's as much communistic it is fascistic. Mohammed appreciated the various binary tensions in the precursor religion and was largely successful in expunging them.

In Spiked last Tuesday Minira Mirza reviewed a Channel 4 Dispatches programme in which Jon Snow posed the question"What do Muslims want?" Mirza was critical of the risk management approach to Islam in Britain and asked whether there was really anything special about the rising religiosity of young Muslims or their disenchantment with the "moral vacuum" in the West - a quest for "meaningful values" which she placed on a par with Christian fundamentalism and the spread of New Age religion.

However, yesterday's events appear to confirm − Tokyo gas attacks notwithstanding − that contemporary readers of the Koran are on average more likely to consider mass murder than those of The Celestine Prophecies. The risk management approach is therefore not devoid of all sense.

Last week a Norwegian friend outlined his views on why second or third generation Muslims seem to "do better" in the USA than in the UK: on the one hand America is leading the way in giving Islamists the world over a persecution complex, and can surely offer many examples of decadence to stoke up their righteous anger. Yet, on the other, the US might be said to have originated as a haven for puritanical prudes, and away from its more liberal coastlines, remains very accommodating to the "peoples of the book" and their moralistic prejudices.

Last night V and I were at an open-air Bollywood and Bhangra dance workshop in Canary Wharf's Cabot Square (with the excellent 4x4 Dancers) One of the spectators was a tall blonde girl wearing a near see-through short dress. As she danced alluringly for her boyfriend to film her, V pointed out to me the rigid expressions on the faces of the three middle-aged Bengali women sitting close by on the edge of the fountain. "Desprecio" − a potent mix of hatred and disgust. Hippies would surely have ignored her; Christian fundamentalists might never have turned up in the first place.

You can learn a lot about the desprecio baked into Islam by studying the society that existed in Mecca just before Mohammed and his revolutionary new faith burst onto the scene.

Interestingly, in Down and out in London and Paris, Orwell reported that the Arabs were then amongst the rowdiest pissheads in the French capital. Their drinking bouts would often end in knife fights. Arab men that is. (Personally I think it's the spectacle of women out drinking − and fighting − that most epitomises the "moral vacuum" to many Muslims in Britain today. )

V usually carries a lot of hand baggage on trans-Atlantic flights. An awful lot. Yet the new restrictions may actually work in her favour because most of it is stuff she would have checked in, but instead lugs into the cabin in order not to fail the weight restrictions. As of yesterday, airlines operating out of British airports have thrown out the rule book on excess baggage. It is also amusing to note that shortly after being deprived of your iPod or digital camera at security you can still purchase new ones to take on board your flight at Dixons in the departure lounge. There are at present no restrictions on Duty Free items purchased inside once you have already had your clear plastic bag searched.
Posted by Inner Diablog at 9:20 am