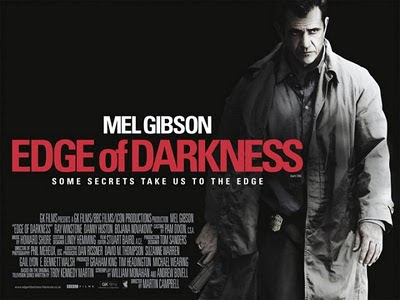 Troy Kennedy Martin, who died last year, wrote the original TV scripts for Edge of Darkness and, incidentally, the screenplay of The Italian Job (1969)...but not the notoriously literal cliffhanger ending which was shot after the project ran out of money.

Now it's over twenty years since I watched the 1985 series, so there's a predominance of fond memory over detailed recollection in my mind when I consider what for many of us was the seminal BBC drama of the decade.

In shrinking the famous complexities of the plot to feature length, this Gibson vehicle has lost more than extension. The premature climax in which Craven and Jedburgh infiltrate the nuclear plant has gone, so here, as Mel is himself sucked into the darkness that swallowed his on-screen daughter, faceless institutional evil turns out to have the more manageable face of one dodgy Senator, one amoral CEO and two blokes in a black SUV.

Ray Winstone certainly chews up his scenes, but his Jedburgh is now detached from the system (or at least attached in ways we cannot fathom), so that his fate is ultimately less affecting than that of the rogue CIA agent played by Jo Don Baker.

It's clear that in the past couple of decades we have shifted from being afraid of radiation to being afraid of being afraid, and the plot adjustments that this has required, reveal quite starkly the less concrete nature of our current forebodings: conscienceless corporations, manipulative government, dirty bombs and home-grown terror threats. And as a result there's something not quite substantive about this particular Edge of Darkness.

Posted by Inner Diablog at 3:24 pm