The Seven Ages of Britain 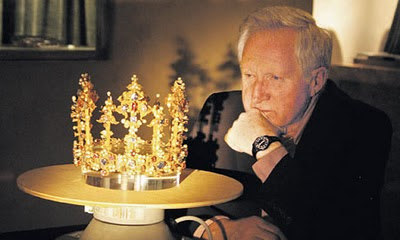 Watch out Simon Schama and Andrew Mars, another BBC stalwart is after a piece of your vanity history programme action!

We're four ages into David Dimbleby's (public) schoolboy history of the British Isles, and so far I can't remember him having mentioned Scotland once.

The concept is simple: Tell the story of English (er British) history by visiting the key national treasures which can be plotted against a narrative familiar to readers of 1066 And All That.

This way people who had big jewels (such as Alfred the Great and Francis Drake) or big gaffs (Romans, Henry VIII) can come to the forefront and all those toiling plebs can be discounted. Indeed, the revolting peasants didn't even merit a mention during Dimbleby's extended paean to the magnificent lifestyle of Richard II. (That's his Queen's crown being contemplated in the pic above.) 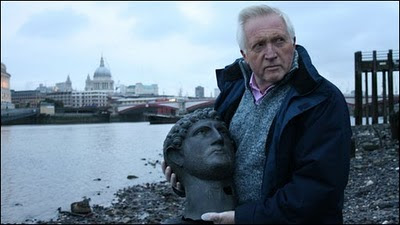 In this week's episode we were astounded to see Dimbleby finally donning a pair of protective gloves before handling a volume in the Pepys Library. Up until then he's apparently had no qualms about whipping through the pages of priceless manuscripts with uncovered mitts, poking his ballpoint at delicate Sutton Hoo trinkets, or stomping all over Roman mosaic flooring.

All in all, the best thing currently on the EBC...er, the BBC.
Posted by Inner Diablog at 3:34 pm